The flowering rosebush table and traveling case that Houdini used in his 3 Shows in One sold today for a whopping $324,000 (with premium) at Potter & Potter's "Salon de Magie: The Klosterman Collection Part III" auction. The bidding was fast and furious and at the hammer Gabe Fajuri announced it was, "The world record for any magic item sold at public auction."

HOUDINI, HARRY (EHRICH WEISZ). HOUDINI’S AUTOMATIC FLOWERING ROSEBUSH. New York: R.S. Schlosser, ca. 1924. The performer places a small earthenware pot atop an elaborate metal table terminating in four large claw feet. A short red flower surrounded by green foliage is then placed in the flowerpot, and the plant is covered with a gauzy cloth. On command, the flower began to grow and transform, expanding into a full size rose bush, revealed when the cloth was whisked away from the tabletop. To conclude, the performer then removed the plant in its pot from the tabletop to present it to the audience. Elaborate cast metal base with concealed crank-wound worm gear and mechanical tabletop, the claw feet on concealed rolling casters. Height of table 37”. Height inclusive of flowers 70”. As elaborate and intricate a mechanism as we have encountered. With the original compartmentalized traveling trunk. See Salon de Magie, page 182. This was one of several flashy effects used to open the production Houdini created for his final American tour, billed as “three shows in one,” being made up of magic, spiritualism exposes, and sensational escapes. In the first act, Houdini presented two rose growths – two identical tables were constructed for the show – by Rudolph Schlosser, an enigmatic New York-based craftsman. Schlosser was both creative and talented, inventing unusual mechanical devices which centered primarily around tricks with feather flowers, including hats and musical instruments that transformed into giant colorful bouquets, as well as the infamous “backpack” that visibly transformed a magician’s assistant into an enormous flower-covered tree without any special covering or apparent apparatus. Magical horticulture has been a constant theme in the shows of stage magicians, and many methods from the all-metal P&L model, to Kellar’s growth of real roses, to the now-standard Botania have been devised by dozens of makers to apparently instantly grow flowers – both real and imitation – on stage before a live audience. Germain’s model of the effect was considered especially artistic. The rose growth offered here is one of two Schlosser built for Houdini, and is as elaborate and finely made as it is inventive in its working. 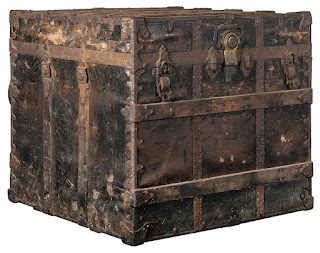 As the description states, this is one of two tables that Houdini used in the show. The second table and its traveling case are owned by Dr. Randall Bell and currently on display at Houdini Unchained: The Legacy of Harry Houdini at MUZEO Museum and Cultural Center in Anaheim.
Congrats to the winner and to Potter & Potter for setting this new record!

Email ThisBlogThis!Share to TwitterShare to FacebookShare to Pinterest
Tags: 3 Shows in One, Auction, Houdini's magic, Props