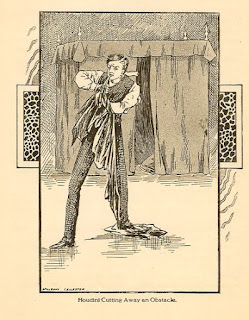 Our friend Neil McNally has a sensational Houdini scoop on his terrific blog The Doug Henning Project. Neil has shared a photo of Houdini's recently re-discovered jack knife along with a letter of provenance from Doug Henning himself. Neil got this from Brian Lumley, Doug's early assistant.
Could this be the pocket knife Houdini famously used to cut off his coat during the Mirror Handcuff Challenge in 1904? How cool would that be?
You'll have to head over to The Doug Henning Project to see the knife and read Doug's letter, so go! Before Houdini cuts ya.
Thanks Neil and Brian.