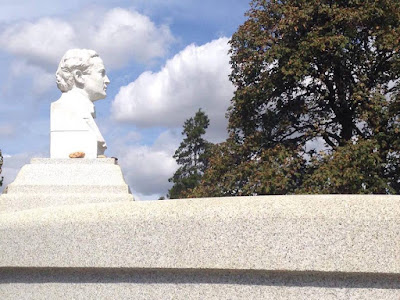 It was 100 years ago today that Houdini unveiled the exedra that fronts the Weiss family plot at Machpelah cemetery in Queens. Houdini dedicated the monument in a special ceremony on Sunday, October 1, 1916.

The creation of the exedra (resting place) had taken over a year. Houdini entrusted the task to Oscar Teale, a past president of the Society of American Magicians whom Houdini employed as a private secretary. Teale worked throughout 1915-16 while Houdini was on tour. The job was not an easy one. The contractors deviated from Teale's model, a marble seat developed a crack, and faulty drilling broke large slabs of stone which had to be replaced. In the end, it cost Houdini a whopping $40,000 (that's close to a million dollars today).

The finished exedra was cut from a thousand tons of Vermont granite and ornamented with figures hewn from Italian marble. The original headstones for Houdini's parents were placed inside each end of the exedra. On the back was etched:


Erected By
HOUDINI
1916
In Sacred Memory
Of His
BELOVED PARENTS

About 250 people attended the dedication ceremony, which was conducted by Rabbi Bernard Drachman and Rabbi A.B. Tinter. Newspapers from as far away as Pittsburgh covered the event. The new plot had the Weiss family laid out under uniform headstones made from the same granite as the exedra, with Houdini's headstone in place beside his mother.

The exedra that was unveiled 100 years ago is slightly different from the one we know today. It did not have the bust nor the cut glass mosaic emblem of the Society of American Magicians. Those would be added a year after Houdini's death and unveiled during a special memorial service attended by Bess. I've never seen a close-up image of the original exedra, but glimpses of it can be seen in photos taken during construction and Houdini's funeral. (Which you can see below.) 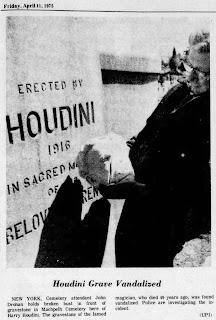 Houdini's ambition to build a lasting monument to his family (and himself) can be counted as one of his great achievements. The Houdini grave site and exedra have become a place of pilgrimage for many, and each year the S.A.M. conducts a wand breaking ceremony at the grave near the anniversary of Houdini's death.

However, the grave site has also seen rough times and controversy. In April 1975, the grave became the focus of attention when escape artist and Houdini provocateur Norman Bigelow claimed to have "deciphered a complex code" that revealed Houdini had hidden his secrets inside the exedra. That same month, cemetery revelers, high on PCP, dislodged and broke the original grave bust. The timing lead some, including James Randi, to believe Bigelow had committed the vandalism in an attempt to prove his theory.

The bust was replaced by the S.A.M. in a special ceremony on March 24, 1976, in time for the 50th anniversary of Houdini's death (Saturday Night Live would do a "broadcast" from the gravesite that year). However, the second bust was stolen in 1983. After two more replacements were stolen, the S.A.M. decided it was best to leave the monument headless. Then, on May 25, 1994, the entire gravesite experienced extreme vandalism with the destruction of two stone benches and the headstones of Leopold and Gladys Weiss.

With help from magicians, including generous donations from David Copperfield and James Randi, the S.A.M. repaired the gravesite (although Gladys and Leopold's headstones have yet to be replaced). In 2007, the site once again became of the center of controversy when a plan to exhume Houdini's body to test for poisoning drew nationwide attention. It was later dismissed as a publicity stunt.

In 2011, Dorothy Dietrich, Dick Brookz and Steve Moore of the Houdini Museum in Scranton took it upon themselves to restore the long missing Houdini bust with a reproduction made at their own expense. They also oversaw the upkeep of the gravesite during a time of dispute between the S.A.M. and the cemetery over costs.

But all disputes have now been settled, and the S.A.M. has resumed the upkeep of the grave of their "Most Illustrious" past president. In fact, this past May, the S.A.M. concluded a major cleaning and restoration of the entire exedra, just in time for its 100th anniversary today.


Below are photos of the exedra throughout the years.

Last Monday, September 26, our magical friend Colleen Bak visited the gravesite and took these beautiful photos (as well as the image at the top of this post), giving us a nice look at the 100-year-old Houdini-Weiss exedra as it proudly stands today. 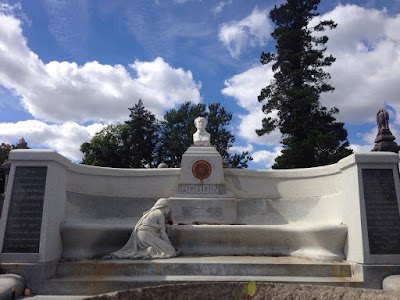 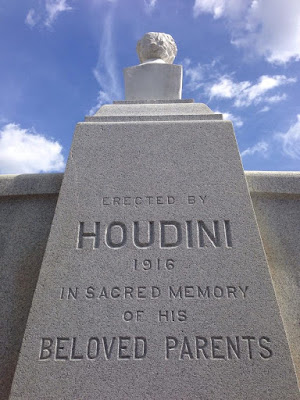 Background on the building of the exedra from Houdini!!! The Career of Ehrich Weiss by Kenneth Silverman.