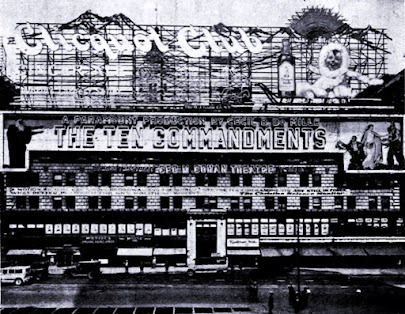 I've always wondered what movies Houdini might have seen during his lifetime. He certainly lived during an exciting time in cinema history. Did he ever see The Kid or Phantom of the Opera I wonder? I do know he and Bess were regular movie goers, but apart from his own movies, I've never come across any specific mention of any movie he might have seen. Until now!
Not surprisingly, I found this at the mighty Harry Ransom Center during my visit last summer. The below letter--which can be found in the Houdini-Bess correspondence file--tells the tale and is a delightful letter to boot.
I'm assuming Bess and her mother accepted Harry's playfully formal invitation. The theater they would have traveled to that night was the Geo. M. Cohan Theatre located at 1482 Broadway in Times Square. The photo at the top of this post shows the theater when it was playing The Ten Commandments during its record breaking run in 1924. Houdini had met the movie's famed director, Cecil B. DeMille, in Hollywood in 1919.
The Geo. M. Cohan Theatre was demolished in 1938 along with the Fitzgerald Building in which it was housed. The New York Theatre opened on the site in 1940. Today the site is occupied by the 4 Times Square skyscraper.