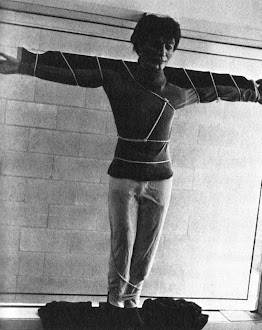 One of the more unusual pieces of surviving Houdini apparatus is his "Cross Escape." There are actually two crosses. One is gaffed for quick release and was acquired by Sidney Radner from Hardeen. Today it is owned by Teller. The other was acquired by Henry Muller from Dunninger and was displayed for many years at the Houdini Magical Hall of Fame. The photo in the right shows this latter cross as it appeared in the museum. (Fun fact: I now own that mannequin head.)
I admit this particular escape has always perplexed me. The Houdini Magical Hall of Fame described it as "a famous Houdini challenge escape," yet I've never been able to find any account of Houdini ever performing it. The quick release gaff seems more like a spiritualism or magic effect than a Houdini escape, and the overt religiousness doesn't seem to be Houdini's style. Recall how he took offense to Carl Mysto's use of a coffin onstage.
But David Muller recently sent me extraordinary audio of Joseph Dunninger going through the collection he sold to David's father in 1967, describing each piece of apparatus and its history. Here's what he says about the cross:

Dunninger: "The Houdini cross escape, used in Houdini's earlier performances. Made in his museum days. He would be tied to the cross, a screen would be placed in front of it and in a few moments he would liberate himself. It needs some repair as is obvious, but it's of very great historical value as it belonged to Houdini and was one of his first sensational escapes."

Hearing Dunninger call this an effect from Houdini's "museum days" is informative. Maybe this explains why I've not been able to find an account of it? And its similarity to a spiritualism or magic effect fits with the evolution of the escape act.
Teller also describes it as a "carnival item." In an interview Two Magicians One Mic Podcast, in which we get a glimpse of his cross in his "Houdini alcove", Teller says:

Teller: "It's a carnival item. It would be erected on stage and the person who's doing the spiel on the bally would take, usually, a runaway 13 or 14-year-old drug addicted girl, who happens to be with the carnival, and tie her neck and wrists to this cross. And then at the moment when they were trying to turn the tip and bring the whole group into the tent, all of a sudden she would just walk away from it. The ties would be gone." 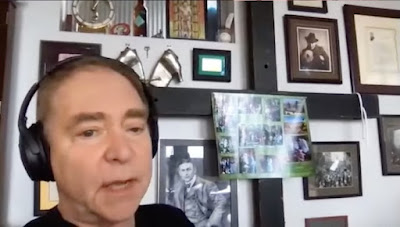 The cross escape coming from dime museums or carnivals does makes sense. It's even possible Houdini didn't build the effect himself, but acquired it as he did his electric chair. But I'll keep on searching for some account of Houdini doing the escape himself.
In the 1970 BBC documentary The Truth About Houdini, Sidney Radner demonstrated his gaffed cross. This scene was cut scene from the documentary––possibly because The Magic Circle objected to the exposure––and it does not appear in any version of the doc today. But you can watch the full clip as a member of my Patreon below.

Thanks to David Muller for the Dunninger audio and Dan Bowen for the Teller interview alert.
Related:
Written by John Cox at 4:30 PM