Inside The Official Houdini Séance 2022 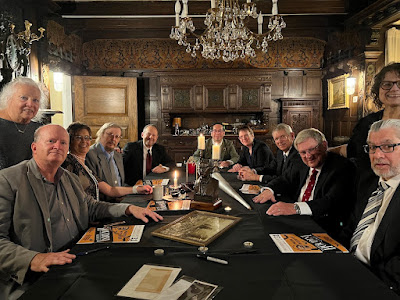 By all account this year's Official Houdini Séance in Providence, Rhode Island, was a very special event and a true post-pandemic return to form. Organizer Bill Radner tells me, "[It was] one of the best events we have ever produced. The room used for the séance was breathtaking by most peoples standards and I feel it was the equal to Fort Worth in the atmosphere department."
The seance this year was a private event with attendees spending two days at the historic Edgewood Manor in Providence. "This allowed for the customary bonding after dinner that the Houdini enthusiasts love so much," says Bill. After a full course dinner at one of the best Italian restaurants in the area, the event kicked off at 7pm on Halloween with an hour long magic show by magician, Joel Acevedo who, according to Bill, "fooled most or all of our members and got a standing ovation at the end of the performance."
At 8pm the seance was conducted in the beautiful victorian dinning room in the same serious and respectful manner that has been used by the Official Séance since 1948. This year's Inner Circle: Seance Directors William Radner from West Springfield, MA and Thomas Bolt from Appleton, WI; Houdini family member Deborah Hardeen Bloom from Canton, CT; Houdini Historian and Handcuff Expert Fred Pittella from Queens, NY; Houdini Collector and Expert Arthur Moses from Fort Worth, TX; Houdini Expert Midge Markey from Sammamish, WA; Houdini Collector and Expert Robert Somerdin from Deerfield Beach, FL; and the Great Grandniece of Medium Anna Eva Fay, Jennifer Yee, and her husband Gene Yee from Melrose, MA.
This seance was conducted by certified psychic medium Jodi-Lynne from Rhode Island. By all accounts she greatly impressed and even mystified the gathering. Arthur Moses tells me, "We're all still processing what we experienced." 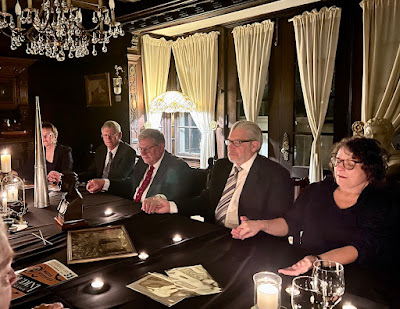 There was even a bit of unexplainable phenomena. I'll let Bill tell you himself:

"My wife Lisa was taking the photos along with a few videos and at certain times a mysterious blue dot moved around the medium and attendees while being questioned. I can’t reproduce it and it has never been seen in any other videos taken with the same device. None of us can figure it out. I am going to investigate this further but I can tell you it was not any kind of reflection or flare from the lighting in the room."

After the event the group had a wine and pizza party in the seance room while signing the Official Houdini Séance programs. This year's program was designed and printed by Tom Boldt's talented graphic artists and celebrates Houdini's many appearances in Providence. I love it! 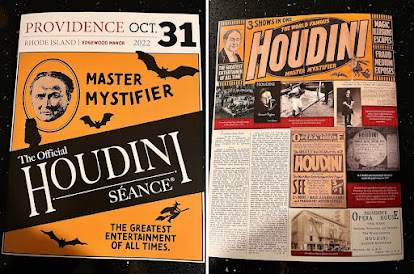 Bill concludes, "The combination of the venue, fantastic dinner, the magician, the camaraderie and great location made this Séance one for the books."
The Official Houdini Séance is a great tradition and I'm so happy to hear this year's event was such a success, even if Houdini again decided to sit it out. Or did he?
Thanks to Bill Radner and Tom Boldt. Check out my coverage of past seances below. I will be sharing more photos from this year's seance on my Patreon.
Official Houdini Seances past:
Written by John Cox at 9:50 AM