)? Why haven’t even the biggest names in the world of Houdini ever seen the film (including myself)? The reason is a collector named Larry Weeks.

According to a post on the Genii forum by Patrick Culliton (who has a passionate interest in preserving Houdini's film work), Weeks was given the only known print of The Grim Game by Houdini’s relatives. But for reasons of his own, he has refused to share it or make it public for some 60 years. Patrick says that magic film historian Bill McIlhany "was begging him and offering him a lot of money to have it preserved." It's unclear whether this happened.

Hopefully, at some point, Weeks had the unstable original nitrate footage transferred to safety film. If not, Patrick warns that The Grim Game, said to be Houdini’s best movie, could now be just a pile of explosive goo. 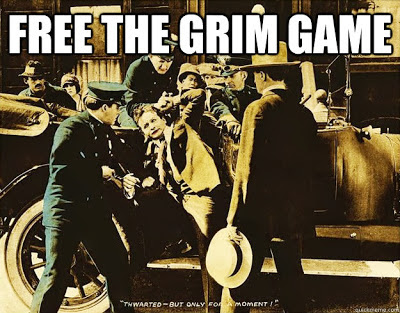 UPDATE: I found an old thread on the Genii forums where someone said Larry Weeks screened The Grim Game at an IBM convention in the 1960s, and that he later confirmed he had transferred it to 16mm safety film. I've also uncovered evidence of a screening at The New School in 1974, which may have been the last time anyone has ever seen The Grim Game.