'A Spotlight For Harry' in paperback 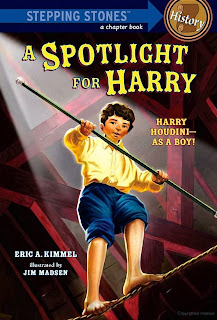 And speaking of Young Houdini...  Eric Kimmel’s A Spotlight For Harry

has been released in paperback.

This book, aimed at readers 4-8, tells the story of how young Harry Weiss and his brother, Dash, discover a love for performing when the circus comes to their small Wisconsin town. Harry and Dash decide to try circus tricks in a nearby barn, and although Harry’s headstrong determination leads him and his brother into trouble, it also opens up a whole new world for him—a world of performance that later becomes his life’s passion.

I notice a new blurb has been added to the cover announcing the book as featuring “Harry Houdini as a boy!” A wise move as it wasn’t at all clear from the title and cover art on the original hardcover

(released last year) that this was a book about the great magician.
Written by John Cox at 8:23 AM