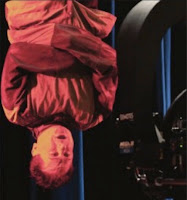 While Houdini’s brother was name-checked in episode six (Family Limitation) and episode nine (Belle Femme), he will make an actual appearance in episode 11, Paris Green, played by actor Remy Auberjonois. That episode is due to air on November 28.

There is also an article by Jim Steinmeyer about Hardeen and Boardwalk Empire in the November issue of Genii.

Hardeen is starting to chock up a respectable filmography. He was first portrayed on screen by Jack Carter in the 1976 ABC telefilm, The Great Houdinis. He had a much bigger role in the 1998 TNT original movie, HOUDINI, played by Mark Ruffalo.

Of course, the real Theo. Hardeen is said to have appeared in a film called Medium Well Done, but I don't believe that film has ever surfaced.
Written by John Cox at 6:00 AM