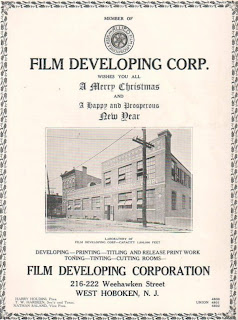 This 1921 advert from Exhibitors Trade Review just sold on eBay for a tidy $104. What makes this ad so special is the company running it is the Film Developing Corp., Houdini's ill-fated foray into "legitimate" business.

What makes this ad even better is it features a photograph, which is the only photo I've ever seen of the West Hoboken facility. It should also be noted that the name here is clearly Film Developing Corp., not Film Development Corp., as it's called in most biographies.

Houdini started the FDC in 1916, promising a faster, cheaper process for developing motion picture film using machinery and chemicals worked out by an aniline dye expert named Gustav Dietz. At the time, most film developing was still done by hand. Houdini boasted that the FDC could turn out 8000 feet and hour, "more than any 20 human beings can in a week with their present methods." (Houdini!!! The Career of Ehrich Weiss

Unfortunately, Houdini's film lab venture would prove to be a failure, costing Houdini and his investors (including magician Harry Kellar) dearly. Houdini would later confess, "It will be a Godsend for all of us if we get away from it in a legitimate manner."

UPDATE: Both Kevin Connolly (Houdini Himself) and Dean Carnegie (Magic Detective) have chimed in with their own contributions on this one.