'The Truth About Houdini' on DVD 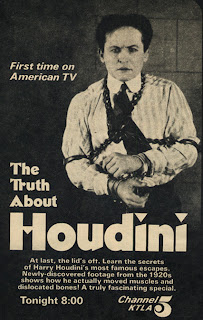 So Act Network is selling a DVD of the 1971 BBC-Patria Pictures documentary, The Truth About Houdini, on Amazon.

The Truth About Houdini is one of the better Houdini docs, in my opinion. It contains terrific interviews with Milbourne Christopher, Walter B. Gibson, James Randi, and Sidney Radner. It also includes a great deal of unedited Houdini footage, credited as coming from the collection of Larry Weeks (the man who is currently squatting on the only known print of The Grim Game, but don't get me started on all that).

In fact, much of the footage missing from Kino’s Houdini The Movie Star can be found here, including Houdini’s underwater box escape from The Master Mystery and key missing shots from his 1909 movie, Les merveilleux exploits de Houdini à Paris.

This So Act Network copy is a no frills home-made type of thing (listed on Amazon under the title "The Magic of Houdini"), but the quality is decent and the documentary is complete, containing Sid Radner’s punishing punishment suit escape that was cut when the documentary aired on American TV in 1976.

UPDATE: Apparently this DVD is no longer available from So Act Network.
Written by John Cox at 5:00 AM