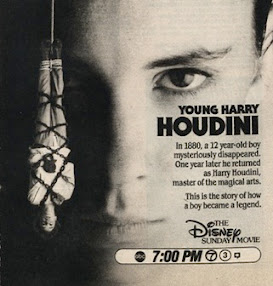 On March 15, 1987, the Walt Disney Company aired Young Harry Houdini as part of their recently relaunched Disney Sunday Movie on ABC. The two-hour made for TV film starred Wil Wheaton and José Ferrer and was introduced by the relatively new Disney CEO, Michael Eisner (along with a special performance by “Mickey The Great”).

Young Harry Houdini tells the story of the “lost years” of Ehrich Weiss. It is actually rooted in fact. The young Houdini did run away from home in 1886 and little is known about his year-long adventures on the road. Screenwriters James Cruickshank and Jim Orr (who also directed) fill in the gaps with a colorful story in which Ehrich finds a mentor in traveling show carney Dr. Tybalt Grimaldi (José Ferrer), a love interest in the pretty Calpernia (Kerri Green), and experiences true mysticism via an indian medicine man (J. Reuben Silverbird).

"Getting this role was like a dream come true for me," said 14-year-old star Wil Wheaton, who performed card and coin magic at the time. "I've idolized, you could almost say worshipped, Houdini all my life!" 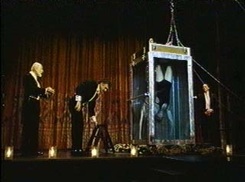 The film begins with the adult Houdini (played by Jeffrey DeMunn who also played the magician in the film version of Ragtime) performing the Water Torture Cell in England. It’s a pretty good recreation of the USD with a fairly authentic looking cell, although the conclusion owes more to Doug Henning’s interpretation than Houdini. Later in his dressing room, Houdini relates the story of his runaway days to Sir Arthur Conan Doyle (Roy Dotrice). “It is the most fantastic story you will ever hear,” says Houdini.

Flashback to Appleton, Wisconsin, in 1886, where we meet “Ehrich Prince of the Air” honing his performance skills while also apprenticing to a local locksmith. An encounter with “The Great Merlin” leads to Ehrich losing his locksmith job and after a dressing down by his stern father (Byrne Piven), Ehrich runs away to prove himself as a magician. 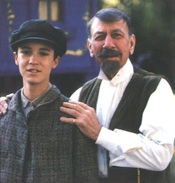 Here the story travels into wholly fictional territory, nevertheless it still has nods to established Houdini lore. Ehrich hops the wrong box car and ends up in Kanas City, as did the real Ehrich Weiss. There is a clever variation on the “convict in cuffs” story when Ehrich frees a fellow traveler from handcuffs. When Ehrich first sees Dr. Grimaldi, he is performing a (Disney-friendly) version of Paligenesia, the effect associated with Ehrich’s real-life influence, Dr. Lynn.

The second half of the film gets a little lost in sometimes bizarre “chosen one” mythology, but along the way we get to see Ehrich reading The Memories of Robert-Houdin and perform his first packing crate escape. And the movie does have a satisfying twist that I won’t reveal. 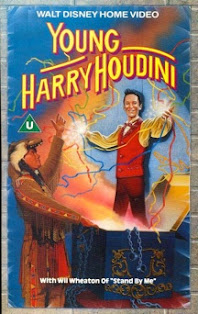 One point of interest is where exactly Young Harry Houdini was shot. Much of the action is set on what appears to be a western backlot. This could be the Disney Studios in Burbank or Disney's Golden Oaks Ranch near Newhall. Jim Steinmeyer was the technical advisor on the film. Jim worked with Doug Henning at the time, so the technical advisor credit reads just "Doug Henning Magic." The Water Torture Cell was supplied by John Gaughan and went on to make many more television appearances.

As far as I know, Young Harry Houdini aired only once. The new Disney Sunday Night movie would go the way of the old and cease broadcast by 1989.

Young Harry Houdini did find it’s way onto videocassette in Great Britain, but it has never been released on any home entertainment format in the U.S. That’s a shame because Young Harry Houdini is a well-made, entertaining family film that deserves to brought up from the Disney vaults.