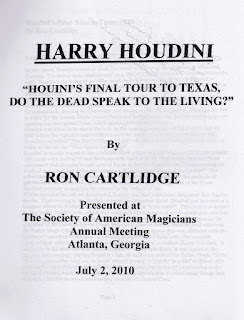 Kevin Connolly at Houdini Himself has the scoop on an updated version of Ron Cartlidge's look at Houdini's adventures in the Lone Star State. Ron has published two previous works, Houdini's Texas Tours 1916 & 1923 (2002) and Houdini and the Ku Klux Klan (2005).

UPDATE: Unfortunately, Kevin has now taken down his site and the headline link is not longer active.
Written by John Cox at 7:15 AM