No, not that code, silly.

The following comes from an article in The American Weekly, June 20, 1948, written by a man named Joe Lee who claims to have been "the long and personal representative of Houdini." His "recollections" are pretty standard stuff (Houdini sealing pies from the cupboard as a boy), but there is this nice paragraph where he explains that he and Houdini had a secret code between them they would use in public.

Houdini and I had a secret signal. When an escape project was suggested in my presence Harry would think it over. If he said: "It's the toughest thing I've ever considered, but I'll tackle it," that meant: Joe, this is a chinch. Let them do what they, I'll handle it easily." and I'd go ahead and make the arrangements.

If he should say: "I'll have to give that some thought, " it would mean: "Take it easy, Joe. I'm not sure about this." I can't remember his ever giving me that latter signal."


So is this Joe Lee on the level? I'm not so sure. Lee claims, "I went with Houdini in 1922, as his publicity agent, general manager and chief investigator of phony mediums." However, Joe's colorful eye-witness account of how Houdini's vanishing elephant came about could only have happened in 1918, years before he claims to have joined the team.

Lee also makes the somewhat extraordinary claim that he was in the room during the famous Atlantic City seance when Lady Doyle  "contacted" Houdini's dead mother. But no one else puts Joe there. In fact, I can find no mention of a Joe Lee in any of the major biographies (apart from Culliton who sources this article in Houdini The Key).

So this is one to take with a grain of salt, but this "code" is a fun detail nevertheless. Here's the full article from the man who (maybe) knew Houdini.


Once again my thanks to Steven Bingen and the Warner Bros. Corporate Archive Research Center for providing this clipping.

UPDATE: Joe Lee was indeed Houdini's advance publicity agent during the first season of his 3 Shows in One. Lee did not continue with the show for the second season. Lee took out a memorial tribute ad in Variety after Houdini died (below). You can read more about Joe Lee HERE. 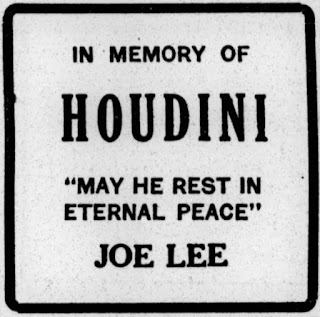