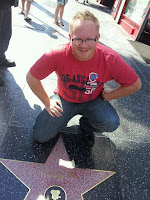 Professional magician, escape artist, and ghost-hunter, Aron Houdini (who really is related to Houdini) is on vacation in Los Angeles where yesterday he performed a straitjacket escape on Houdini's Walk of Fame star on Hollywood Blvd. Aron announced the impromptu stunt via his Facebook page and appears to have pulled it off successfully.

First dedicated in 1975, Houdini's star on the Hollywood Walk of Fame commemorates his work in Motion Pictures. The star is located on the corner of Orange and Hollywood within view of The Magic Castle. It was restored and rededicated in 2008.
Written by John Cox at 7:22 AM