The Chronicles of Young Houdini

People sometimes tell me they are amazed at how I manage to keep on top of all the latest Houdini news and new book releases. Well, I'm amazed at what I manage to miss! First and foremost is my discovery, just today, of this series of five French books (five!) called, Les Chroniques du Jeune Houdini (The Chronicles of Young Houdini). The books are written by Denis Ramsay and have been rolling out since March 2009, with the latest (last?) book having arrived in January 2010.

Here's a rundown of all the books with translations of their titles and plots. I've attempted to clean up these auto translations from Amazon, but they still might read a little odd.

The Chronicles of Young Houdini 1: The Street Magician (2009) 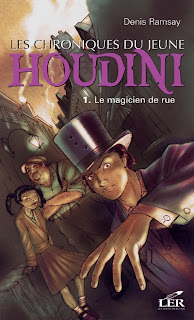 In the streets of New York in 1888, life is tough. Children grow quickly and the life lessons are sometimes difficult. There is little difference between the bandits, traders and even the police. Gangs rule the streets and corrupt law enforcement can be purchased easily, giving free rein in the illicit activities of all kinds. In this context, a young magician of the most gifted, attracted more by the magic of organized crime, is revealed as the "Harry Houdini". Accompanied by his friends Ed and Lucy, Harry is proving to be an extraordinary talent, amazing New Yorkers of all classes with his fantastic illusions. Even Bull, the leader of the city's most powerful gang, is greatly impressed. Can the gangs find peace through the intervention of this street magician who is anything but ordinary. 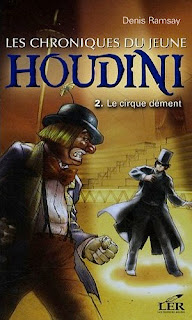 At 14, Harry Houdini is engaged in a traveling circus where he meets Rizzo, a fallen magician who now plays a clown, and plots to bring about the collapse of anyone more successful than he. The troupe of colorful, if not downright strange, characters, travel from city and city and struggle to solve the mysteries that threaten the their "greatest show on earth". Never far from his friends Ed and Lucy, who also work in the circus, Harry develops more and more as an extraordinary magician and he and his friends attempt to uncover the real culprit of the vile attacks and sabotage that plague the circus. But the evil clown does not intend to be overcome so easily ...

The Chronicles of Young Houdini 3: Aboard Noctambuie (2009) 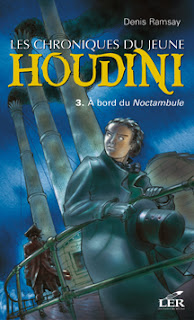 Harry Houdini embarks with his friend Ed for Africa as part of the crew of an old dilapidated steamship, the Noctambule. Not wishing to be alone in America, Lucy also joins his two companions, but has to travel incognito, hidden in a trunk. The aim of the young magician is great ... and large: to capture an elephant and make it disappear in the greatest magic show ever. But the crossing is not easy as a group of pirates approach the Noctambule. Do they have powers of magic like Harry, or are they dealing with a horrible curse? Will Harry and his friends ever return safe and sound America with their coveted prize?

The Chronicles of Young Houdini 4: The Sioux Shaman (2009) 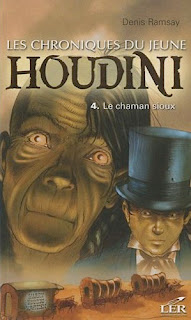 After several weeks at sea, Harry Houdini is back in America where he decides to find his family with his two inseparable friends. Once back in Appleton, Wisconsin, the young magician sees one of his brothers fall seriously ill, and learns that only a famous Wild West Sioux shaman would know the remedy for his ills. Without hesitation, Harry, Ed and Lucy join a caravan that will lead them to this enigmatic Indian sorcerer. But the journey is not easy: famine, storms and disturbing creatures are waiting for them, not to mention Redskins and members of the Ku Klux Klan. Will Harry's magic help ease the rifts between the men who cross his path?

The Chronicles of Young Houdini 5: In the Land of Leprechauns (2010) 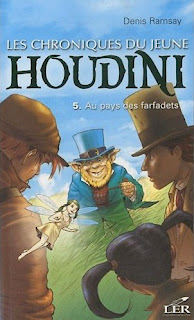 Just as he learns to read, Ed Ryan, the best friend of the young Harry Houdini, sees in a newspaper a photo of his father with with a disturbing description: "Irish Revolutionary arrested." Ed decides to come to the aid of his father, who is imprisoned in the Tower of London, relaying on the help of his beloved Lucy and his young sidekick known as being "the master of evasion." But once in the Old World, all attention turns to a serial killer dubbed "Jack the Ripper" that plagues the streets of London, and soon the trio are apprehended by strange elves in the land of leprechauns. What fate do the elves have for their detention, and what surprises does the Ripper have ready for Harry and his friends?


The Chronicles of Young Houdini can be purchased at Amazon's French, Canadian, UK, and U.S. websites. (I had my best results at the Canadian site.)

Of course, I would really love to see these books translated into English. I wonder if there's any publisher out there willing to bring the adventures of Young Houdini to America?
Written by John Cox at 1:02 PM