Bookslut has an interesting interview with comic book author Matt Fraction, who writes several Marvel Universe titles including Iron Man, Uncanny X-Men, and their current "event" book Fear Itself. Matt has a theory about how superheros in comics can die and "reset", and it involves Houdini: 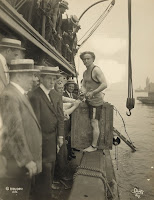 You can read the full interview at Bookslut.com.
Written by John Cox at 8:47 AM