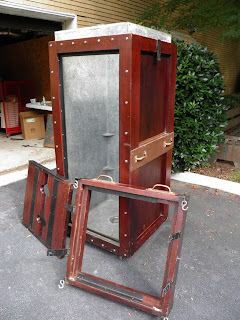 Having failed to sell on the first round, the Water Torture Cell used in The Great Houdinis has been relisted on eBay with a Buy It Now price of $5,500 (reduced by $1000). The working cell comes from the collection of Abb Dickson who provided the escape apparatuses for the 1976 TV movie. It is also mentioned in the Doug Henning biography, Spellbound.

Because the production dressed up the cell with a false metal frame on front, it appears a bit different in the photos on eBay. But this is, indeed, the cell that was used in the film. However, it isn't a real Houdini Water Torture Cell as some in the media claimed at the time.

Click here for a detailed look back at the Making of The Great Houdinis.
Written by John Cox at 9:24 AM