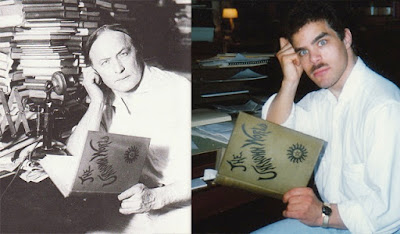 Magician and Houdini aficionado Tom Interval -- who runs the excellent website Houdini in the New York Times -- recently posted this terrific photo on Facebook. This is Tom in the Library of Congress Houdini collection holding a volume titled The Unknown World that should be very familiar to Houdini buffs (the shot of Houdini in his study holding this same book can be found in Houdini His Legend and His Magic by Doug Henning). What a find!

Now Tom checks in with some specific information for us about the very book in Houdini (and his) hands. Says Tom:

"The Unknown World was not a book but a magazine about the occult (see full tagline below). I assume the green clothbound book in the Houdini collection at the Library of Congress (and seen in that cool pic of Houdini) was a bound volume of some unknown number of issues. I can kick myself for not getting better pictures of it (and of everything else) that day (around 1990).

An interesting fact is that the editor of the publication was the same guy who conceived arguably the most popular tarot deck ever: Rider brand."

"It should therefore be understood that this magazine is established chiefly to represent and increase the interest attaching to the investigation of those mysteries which are called transcendental, occult, and mystic. They will not be its sole subject, but it will treat in the main of these, and will avowedly make use of all means at its disposal to spread the knowledge of Mysticism and to multiply the acceptors of its instruction. . .The Unknown World has been founded to represent, as we believe, for the first time in periodical literature, the whole circle of the Occult Sciences. It will deal with their methods, history, and literature in such a manner that they will become intelligible to an unversed reader, while at the same time there will be matters of special interest and value to the well-equipped and earnest mind.

"The departments of Occult Science and history particularly embraced by the present editorial scheme are:—White and Black Magic, Necromancy, Divination, Astrology, Alchemy, Witchcraft, Crystallomancy, Elementals and Elementaries, the Rosicrucians, the Illuminati, Esoteric Freemasonry, the Mysteries, the Mystics, Hermetic Philosophy, the Archaeology of the Secret Sciences. . .In a word, The Unknown World will be devoted to the 'superstitions' of the past, or, more correctly, to the science of the future."

Email ThisBlogThis!Share to TwitterShare to FacebookShare to Pinterest
Tags: Books, Library of Congress, Magazines, Photographs, Then and Now