Win a free copy of the new Houdini novella, Coffeyville

C.E.L. Welsh checks in today to let us know his new Houdini novella, Coffeyville, is out now as an eBook. I've read it and it's excellent! A very clever fusion of fact and fiction. Chris is also offering readers of WILD ABOUT HARRY a chance to win five free copies. Read on... 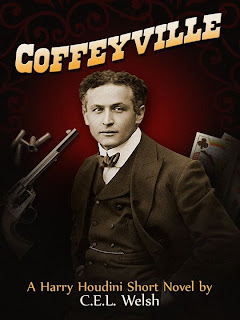 Coffeyville, Kansas, is known as the “Town that stopped the Dalton Gang.” Many shots were fired in the early days of Coffeyville…but there was one lone bullet, fired some years after the Daltons were laid low, that passed unnoticed by most. One man, however, would never forget; a young Harry Houdini, still some years before fame would find him. The events of Coffeyville would ricochet down through the years, giving Houdini the ammunition he would need to pull off the greatest illusion of his epic career. Can you keep up with Houdini’s misdirection?

Follow Houdini’s assistant, Franz Kukol, as he discovers the secret behind Coffeyville - Available to read in your favorite ebook format: Kindle, Nook, and PDF, HTML, etc: via Smashwords.

Just for readers of WILD ABOUT HARRY: Five free ebooks of Coffeyville! Take the following five-question quiz, and email your answers to Author.CELWelsh@gmail.com. The first five received with all correct answers will get a free copy of Coffeyville!

HINT: All the answers can be found here on WILD ABOUT HARRY. Good luck!

One: Houdini's imposing home (which makes an appearance in Coffeyville!) in Harlem, NYC, was located at 278 West 113th Street. Inside visitors could expect to find plenty to amaze and awe, but the fun started at the front door. What was special about the door to Houdini's house?

Two: Around the time Harry was pushing his film career he was accused of having more than one affair. All of the following women were romantically linked, in one way or another, with the master showman. Are the rumors true? Did Harry cheat on Bess? At least one of the stories seems to be accurate, as the woman in question documented the affair in her diary. There is one we can safely say did not happen, however, as the woman in question only exists in a movie! Which of the following names is that movie character?

Three: In my story Coffeyville I explore the question “If Houdini had performed the Bullet Catch, how would he do it?” As with everything Houdini, what we think we know can often prove to be...misdirected. There is some evidence that Houdini DID perform the Bullet Catch illusion in the 1890s, and he had a very unique way of demonstrating the danger of the event. What was the choice he gave the firing committee?

Four: Advised against performing the Bullet Catch, there was no one standing in Harry's way when he planned to be buried alive. He saw Buried Alive as a real show-stopper, a headlining act that would propel him further into the history books. While he never worked out the kinks to the point he could perform Buried Alive onstage, he did run several tests in preparation for it. Famously, his first attempt made a serious impression on Harry as to the danger involved. In his own words, what did Houdini say by way of describing the effect of being Buried Alive?

Five: The Houdinis loved animals and had a number of pets over the years, all considered close members of the family. Charlie, a white Pomeranian given to the Houdinis by the Grand Duke of Russia in 1903, shows up in Coffeyville. Name a dog, a canary, a parrot, a turtle and a rabbit that all shared the Houdini home at one point or another.
Written by John Cox at 9:33 AM