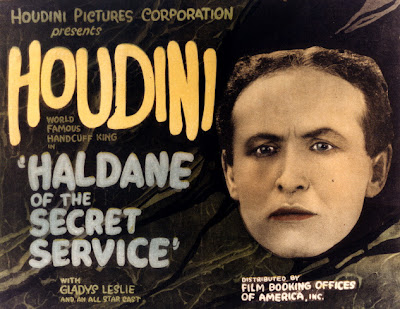 The Contemporary Jewish Museum in San Francisco have announced a special screening of Houdini's silent features, Haldane of the Secret Service and The Grim Game, on January 3, 2012. This is part of the CJM's special programing for Houdini Art and Magic, which opens this Sunday, October 2.

Now, I can only assume that what they mean is they will screen Haldane of the Secret Service in full and the five minute fragment of The Grim Game as seen on the Houdini Movie Star DVD collection. The hour and a half runtime of the combined screening seems to bear this out. As we all know, the only surviving print of The Grim Game is currently available to the public.

Of course, wouldn't it be a wonderful gift to the museum and the magic world to allow a screening of what is said to be Houdini's best film?


For more information on Houdini Art and Magic visit the CJM's official website. For more on Houdini's lost film, check out my post from last February: I've seen The Grim Game.
Written by John Cox at 10:15 AM