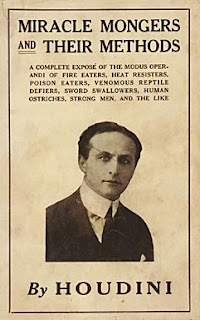 On March 4, 1921, Variety reported the formation of the Houdini Picture Corporation. With $500,000 in capitalization, the trade paper announced that Houdini planned to make four films a year. Of course, only two films were ever made, The Man From Beyond and Haldane of the Secret Service. But what other films did Houdini plan?

There do exist several unmade Houdini film treatments with titles such as The Vulture, Floating Through Space, and The Great Tontine. Probably the best known of these is Yar, The Primeval Man, a lively caveman story that has Houdini rescuing a "Sun Girl" from a rival tribe and bringing her home to his mother (who's name is, incredibly, War).

But now thanks to a clipping in The Culliton Papers, we have evidence of exactly what would have been Houdini's next film, and it wasn't one of the familiar treatments. On October 13, 1923 (the day before the release of Haldane) Houdini laid out his future plans for stage and screen for the L.A. Times:

"I have signed to deliver twenty-four lectures on 'The Negative Side of Spiritualism' after closing my Orpheum tour. I am also planning to make a picture from my book, Miracle Mongers, which will be an out-and-out stunt picture."


Published in 1921, Miracle Mongers and their Methods details the history and techniques of a wide variety of sideshow acts such as fire-eaters, snake-handlers, frog-swallowers, and strong men. Much of Houdini's experience with these performers came first-hand from his early days in show business. It's all terrific fodder for the screen, actually. But what did Houdini have in mind here? Would he play a man among the miracle mongers -- an agent infiltrating the bizarre world to solve a crime maybe? Calling it an "out-and-out stunt picture" is also intriguing.

Now, one could argue that Houdini is just saying this here to promote his book. However, Miracle Mongers had already been in stores for three years at this point, and Houdini had a much newer book to promote, Houdini's Paper Magic. I think there might be something to this Miracle Mongers movie, if for no other reason that it sounds like good idea and is a pretty crafty bit of cross-promotion. One can easily imagine a new edition of the book with movie poster cover art.

Unfortunately, Haldane of the Secret Service was a flop with the critics and public, and this coupled with financial problems with his Film Developing Corp (not to mention a burgeoning new career and anti-spiritualist crusader) led to Houdini giving up movies altogether.

You can read Houdini's film treatments in Houdini's Strange Tales.