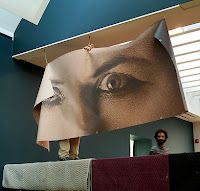 Houdini Art and Magic has left the Skirball Cultural Center in Los Angeles and is headed north to San Francisco where it's due to open at the Contemporary Jewish Museum on October 2, 2011. The exhibition will be on view there until January 16, 2012.

Already the CJM has announced a special Members Only Opening Celebration and Preview event on October 1st ("Straitjackets not required"). The museum will also host a Magic and Mystery Family Gala on December 3. That event is open to the public.

For more details vist the Contemporary Jewish Museum's official Houdini Art and Magic page. I'll also keep up with with all the special events and offers that might be coming our way during Houdini's stay in the City by the Bay.