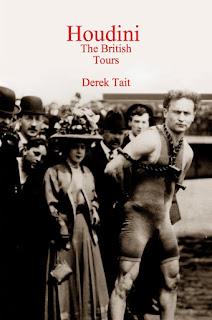 Great news. Author Derek Tait tells us he will have the first copies of his new book, Houdini: The British Tours, in hand next week, and he has set up a page on his official website where you can purchase a signed copy direct from him via PayPal.

Featuring newspaper reports of the day, eyewitness accounts together with many photos, posters and illustrations, this 188 page book provides a compelling account of Houdini's many visits to Great Britain.

Houdini: The British Tours will be available from online retailers such as Amazon.co.uk at the end of the month.

Purchase signed copies of Houdini: The British Tours from derektait.co.uk.

UPDATE: Houdini The British Tours is also now available for the Kindle via Amazon.co.uk and Amazon.com.
Written by John Cox at 9:42 AM