I wanted to find something appropriate to post on this tenth anniversary of 9/11, and I think I've found exactly that here. This is a terrific photo of Houdini performing his suspended straitjacket escape in Time Square on November 5, 1917. Houdini is actually using a crane that is in the process of constructing the New York subway. 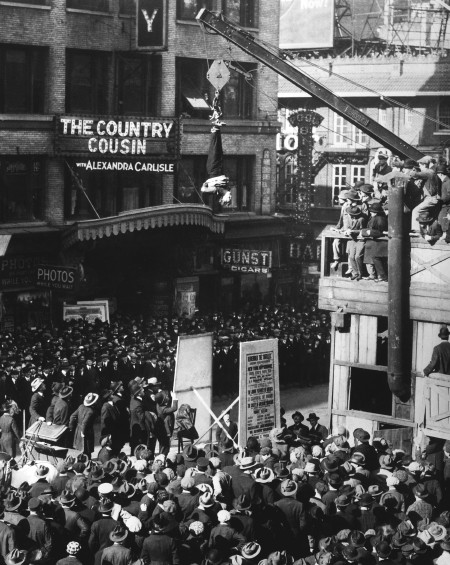 But there is more to the history of this stunt. Houdini had tried and failed several times to get permission to do a suspended jacket escape in New York City. He frequently clashed with police when he performed his overboard box escape in the harbor, once having to hire a tugboat on the spot to take him and reporters out beyond the city limit. But permission was finally giving for this stunt as it was "for the purpose of advertising a patriotic performance" the following Sunday at the Hippodrome.

That performance was a benefit for the families of the "Antilles disaster", the torpedoing of an Army transport by the Germans on October 22, 1917. One paper called the 67 killed that day "the first American victims of war."

Remembering all those brave men and women who lost their lives on 9/11.
Written by John Cox at 8:01 AM