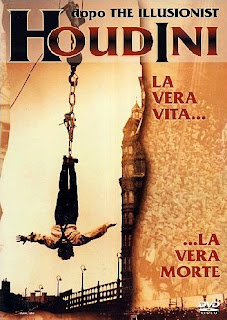 Having just discovered a series of five French Young Houdini adventure books, I decided I better do a thorough search of the international Amazon sites for more gems I may have missed. While I haven't turned up any more books, I did come upon this Italian documentary that was released on DVD in October 24, 2007.

Can't say I've ever seen an non-English language Houdini doc., and certainly not one that was released on DVD. But is this indeed an Italian-made documentary, or could it be one one of the familiar English language docs dubbed into Italian? The Amazon description says the doc uses "unpublished diaries, original films, documentaries of the time, archival footage, and interviews with employees and family members."

Does anyone know anything about this particular documentary and DVD? If someone wants to roll the dice, it can be purchased at Amazon.it.

UPDATE: Amazon now shows one of the producers as Pen Densham, so I'm betting this is 1979s Houdini Never Died.
Written by John Cox at 7:43 AM