Magicana has announced that Magicol No. 184 will be shipping next week, and I'm honored to see that the article I wrote about the Houdini family guestbook has made the cover! Here's a description from the Magicana blog: 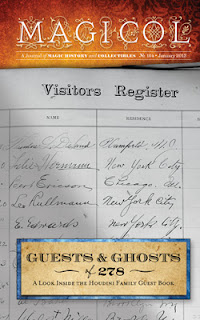 Drawing from his presentation in May 2012 from the 43 MCW, John Cox, of Wild About Harry, presents an overview of one of magic’s seldom-seen treasures, Houdini’s Guest Book from 278 W. 113th Street. Filled with signatures from 1919 to well beyond Houdini’s death to1952, the book shares its own tale travelling from home to home and owner to owner. John does a beautiful job highlighting some of the more famous and arcane visitors.

You can subscribe to Magicol at www.magicana.com.
Written by John Cox at 8:34 AM

Email ThisBlogThis!Share to TwitterShare to FacebookShare to Pinterest
Tags: 278, Magazines, Magicana, Other magicians