The Life (and Death) of Harry Houdini

Houdini might be struggling to find his way onto Broadway, but he's having no trouble appearing in local theater. The Life (and Death) of Harry Houdini will be presented as part of The Philadelphia International Festival of the Arts, Mar 27 - Apr 7, 2013. 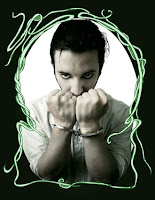 EgoPo invites you behind the curtain of America’s most beloved magician. A mysterious magician’s assistant brings you the life and death of Harry Houdini through a series of his most famous magic acts. Embark on a journey where séances, absinth, love, shackles, faith, and a singular punch to the stomach weave a tapestry of America’s complex relationship with the need to believe and the desire to prove. This world premiere, told through many of Houdini’s own lectures, is a magic show of life, death, and beyond.


The Life (and Death) of Harry Houdini is sponsored by The Jacob Burns Foundation. Visit the EgoPo website for show dates and to purchase tickets.

Thanks to Richard Kaufman at the Genii forums.
Written by John Cox at 4:07 AM

Email ThisBlogThis!Share to TwitterShare to FacebookShare to Pinterest
Tags: Plays