Who coined the word "Escapologist"? 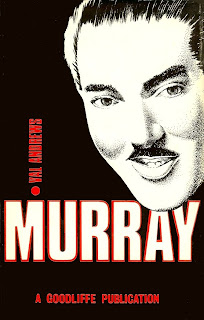 Who coined the word "escapologist"? Most will tell you it was Murray, an Australian escape artist who gained fame in the 1930s with some spectacular escapes, including a handcuffed parachute escape that Houdini once proposed but never performed. That's because Murray himself always claimed the word originated with him. Indeed, posters from the time bill him as "Murray the Escapologist." It's even on his tombstone.

However, in a discussion on this very topic at The Magic Cafe forums, user "Moxahalla" uncovered a quote by Houdini in the Australian newspaper The Argus dated Feb. 18, 1910. The opening paragraph of the article reads:

"If I might be allowed to coin a word, I would call myself an escapologist", said Houdini, the handcuff king, who arrived in Melbourne yesterday, to appear at the Opera-House to night.

So it was Houdini, not Murray, who actually coined the word escapologist. But it could be argued that Murray is the one responsible for making it part of the magic lexicon as Houdini never used it, to my knowledge, in any advertising of his own. So maybe they can share the honor. After all, Houdini has a lot of trophies on his mantel, and I've always liked Murray.

In 1974 Val Andrews penned a delightful "autobiography" of Murray (cover posted above). It says Murray because interested in magic at age 5. Unfortunately, the book does not record whether the young Murray remembers Houdini's visit to his home town in 1910. But this certainly could have left an impression on the 8-year-old budding magician. Perhaps enough for him to became an "escapologist" himself one day.

UPDATE: Here are a couple clippings from a March 1915 Indianapolis Star that show Houdini not only used the word "escapologist," but also used it in his advertising. Sorry Murray! 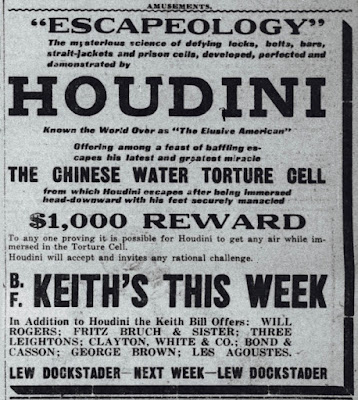