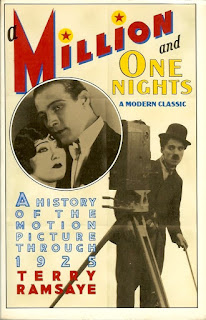 I love it when I find a new nugget of Houdini info where I don't expect it. Here's an example from the book A Million and One Nights: A History of The Motion Picture Through 1925 by Terry Ramsaye. This is a remarkable 868 page history of the movies published in two volumes in 1926 (yes, there really was that much movie history by then).

In 1919 a quartet of brave conspirators met to form the Supreme Pictures Corporation to rehabilitate the status of the serial with a master effort in mystery and detective story thrills. It was to be a million dollar corporation, etc. In electing officers they decided to leave the presidency to the toss of a coin.

Louis Grossman, the business man of the party, flipped a quarter in the air. It struck the desk and rolled off on the floor.

Then the august directors of that million dollar corporation spent a half hour on hands and knees searching for the missing twenty-five cents.

The corporation has faded and the quarter is still missing.


What Ramsaye calls the Supreme Pictures Corporation was eventually christened Octagon Films, and I can't help but see this comedic incident as a serious omen. Houdini not only had to sue the company for his share of the profits from their one serial, The Master Mystery, he ended up losing a great deal of his personal fortune in various motion picture ventures.

The coin was trying to tell you something, Harry.

UPDATE: It turns out Supreme Pictures was not the same company as Octagon Films. Houdini's involvement with this company might be a untold story.
Written by John Cox at 10:30 AM