The Inquisitor's Apprentice released in paperback

Houdini is featured in new young adult novel, The Inquisitor's Apprentice by Chris Moriarty, which is released today in paperback. The illustrated book is the first in a series of adventures starring 13-year-old Sacha Kessler and the NYPD in an alternate New York universe. While the book is primarily about Sacha and Thomas Edison, Houdini plays a role in the story. According to the author: 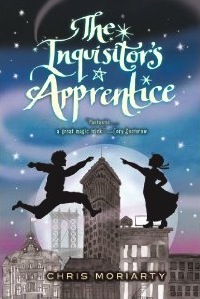 "Harry Houdini is just about my favorite historic character in the whole book. I have long been fascinated by Houdini, an intensely private man who somehow managed to be a buttoned-down and scholarly rabbi’s son in his private life while doing more than anyone in his day to create the modern American cult of celebrity.When I first started writing the NYPD Inquisitor books, I only planned to have Houdini appear in book one. But to be honest, I’ve enjoyed writing about him so much that I’m having a hard time saying good bye to him. So no promises, but I think he might be back sometime."