WIN a free copy of Masters of Mystery 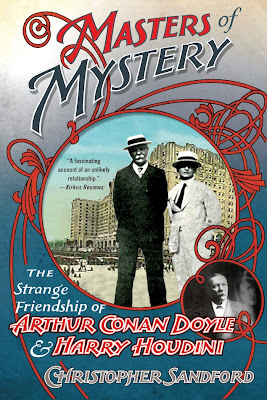 Today sees the U.S. paperback release of Christopher Sandford's excellent book, Masters of Mystery: The Strange Friendship of Arthur Conan Doyle and Harry Houdini, and publisher Palgrave Macmillan is offering five FREE copies to the readers of WILD ABOUT HARRY.

To win you need to reside in the U.S. or Canada and know a little about Houdini and Conan Doyle. Just answer the questions below:


Email your answers along with your name and address to [the competition is now closed] by February 28, 2013. My spirit guide will randomly select five winners who will be announced on March 1st. Your book will then be sent direct from the publisher.

Masters of Mystery: The Strange Friendship of Arthur Conan Doyle and Harry Houdini can be purchased at Amazon.com. You can read my review HERE.