I figured I'd go with a sports-themed post on this Super Bowl Sunday. Here is a never before published photo of Houdini on a golf course with his manager, Martin Beck, and two unidentified men. This comes from Jon Oliver who is generously sharing with us rare images from his remarkable collection.

"Christopher was not always as smart as he claimed. I asked him about Houdini's golf game, and he told me Houdini never played golf never even stepped on a course in his life. I showed him a photo of Houdini and Martin Beck playing golf and he shot back that the photo was staged!" 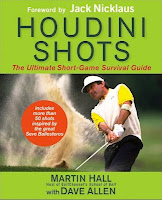 By the way, in March a book will be released called Houdini Shots: The Ultimate Short Game Survival Guide by Martin Hall and Dave Allen. No doubt a collection of techniques employed by Houdini on this very day! But you'll need to wear a three piece suit to pull them off.

Thanks again to Jon Oliver.
Written by John Cox at 8:07 AM