On Sunday, March 23, I had the great pleasure of taking "The Haunted Houdini Tour" of Los Angeles. This was a co-production of GOULA and LA Hauntings and was conducted by renowned ghost hunter, Richard Carradine. I was expecting to have a good time with my fellow Houdini buffs, but I frankly didn't expect to learn anything that I didn't already know about Houdini and L.A. Well, I'm happy to report that Richard knew his topic and this tour did provide me with a few revelatory moments. So let's hit the road!

I elected to take the 10:30am tour, which was the first of three tours planned for the day. Joining me were fellow Houdini nuts: Joe Fox, Joe Notaro (HHCE), Mark Willoughby, and my father, Ronald Cox (not a "nut", but integral in the formation of my Houdini mania). We gathered and met tour guide Richard Carradine in front of the historic Hollywood Heritage Museum across from the Hollywood Bowl in, you guessed it, Hollywood! This was actually our first Houdini location. The 101-year-old barn that houses Hollywood Heritage was once part of the Famous Players-Lasky Studio where Houdini made The Grim Game and Terror Island. Yes, Houdini walked through these doors.


Twelve of us loaded into a black van, and the first surprise was that Richard handed out a special 30-page tour booklet he had prepared with photos and news-clippings related to Houdini and Los Angeles (collector alert!). Some of the clippings were new to me, including one with a photo of Houdini and director Cecil B. DeMille that I've never seen before. There was also a clipping that made my jaw drop as it solved a recent mystery discussed here on WILD ABOUT HARRY...but let's save that for when we get there.

We left the museum and plunged into Hollywood for our first location at the corner of Selma and Vine. This is where the Famous Players-Lasky Studio once stood. As I said, this is where Houdini made his two Hollywood features, The Grim Game and Terror Island, and where the Hollywood Heritage barn originally stood. For years it was a parking lot. On this day it was being cleared for construction. At the far corner of the studio on Sunset and Vine stands a bank which also has a Houdini connection. It was here in the basement that the S.A.M. Houdini collection was housed (trapped actually) for many years. Richard pointed out that the ghost of Fatty Arbuckle is also said to haunt this stretch of Sunset Blvd.


After pulling a Houdini escape from traffic on Sunset Blvd, we continued up into Laurel Canyon and stopped in front of the fabled Houdini Estate. Richard nicely laid out the history and mystery of the property (and its related ghost stories -- this was a "haunted" tour after all). He also offered up his own theory on why the property is confused with Houdini and suggested an alternate location for where the great magician might have stayed. I admit, I found his ideas on this pretty intriguing, and it could shake up my own thinking on this. It's a little too much to go into now, but maybe I can talk Richard into writing a guest blog for us at some point.

After the house, we set out on a long trek downtown, passing the cemetery that holds Harry Kellar on the way. Richard kept the journey lively and always interesting with a steady commentary that took us from Houdini's movie career into the realm of the spirits!

Arriving in downtown, I was very excited when we rolled up to the "First Spiritualist Church of Los Angeles." This is a famous L.A. Houdini location that I've somehow never found time to visit myself. It was in this church that Houdini, under his own test conditions, took a photo that produced a strange streak of light that he couldn't explain. It's come down as the only spirit-related phenomena that stumped Houdini.

Amazingly, the church, which was founded in 1911 and expanded in 1921, is largely unchanged, at least on the outside. Here we disembarked from our van and took some photos, and I was able to take a quick peek inside. The interior has seen renovation and there was a service being held on this Sunday morning (no, not a seance, it's now a Christian church), so there was no way to recreate the photo of Houdini at the alter (reproduced in the tour booklet). The church is not in the best of condition, so how long this important Houdini location will remain unchanged is questionable. But what a treat to see! 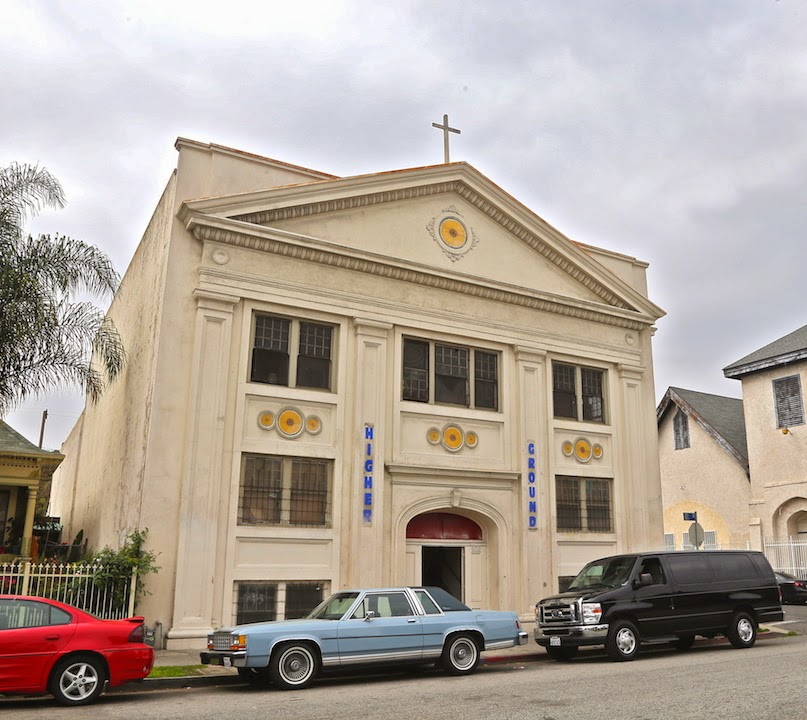 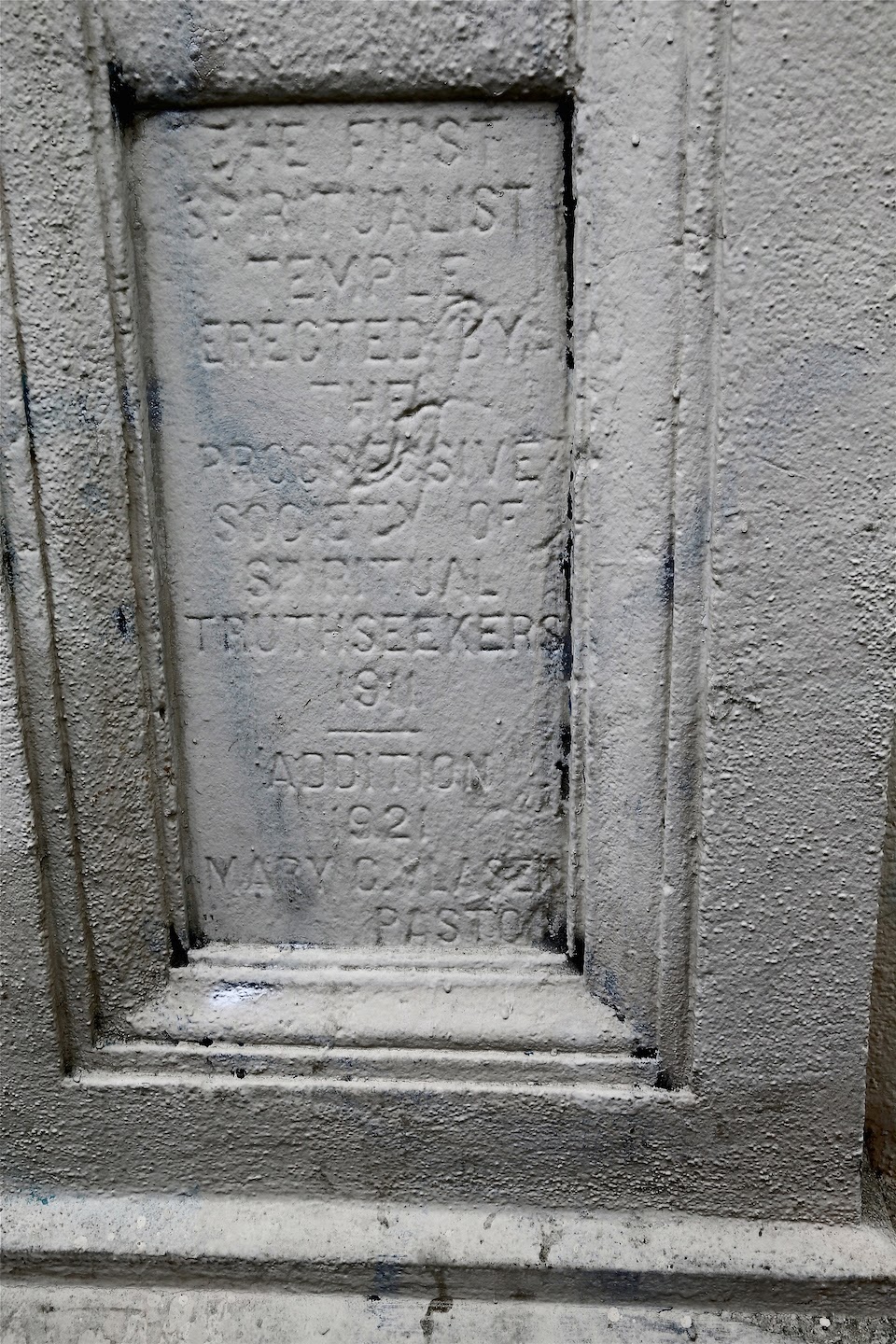 From the Church it was a short hop to the next location, and here's where Richard solved a Houdini mystery for us. We rolled up to the historic Los Angeles Examiner Building, where Houdini once performed a suspended straitjacket escape. I blogged about this back in November, but could not identify exactly when this escape took place. Well, the clipping in the booklet that made my jaw drop before we left Hollywood was an article from the Examiner which dates the escape as April 5, 1923. This was at the same time as the First Spiritualist Church photo and Houdini's Spiritualist lecture. A busy time for Houdini in Los Angeles!

The clipping also included a photo of Houdini being strapped into the jacket, and I was surprised to see that it was the photo used on a recent episode of Pawn Stars to authenticate a Houdini straitjacket (which sold in auction in 2011). So not only do we now know the date of this escape, but we know which straitjacket he used that day. It's wild that in just a few months we've gone from never even knowing that this escape happened, to now knowing more about this than probably any other single suspended straitjacket escape. 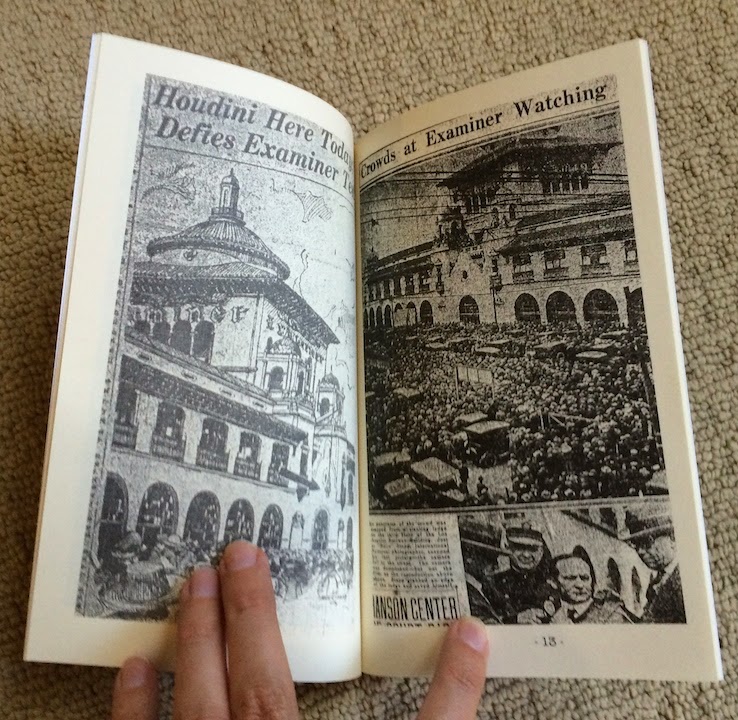 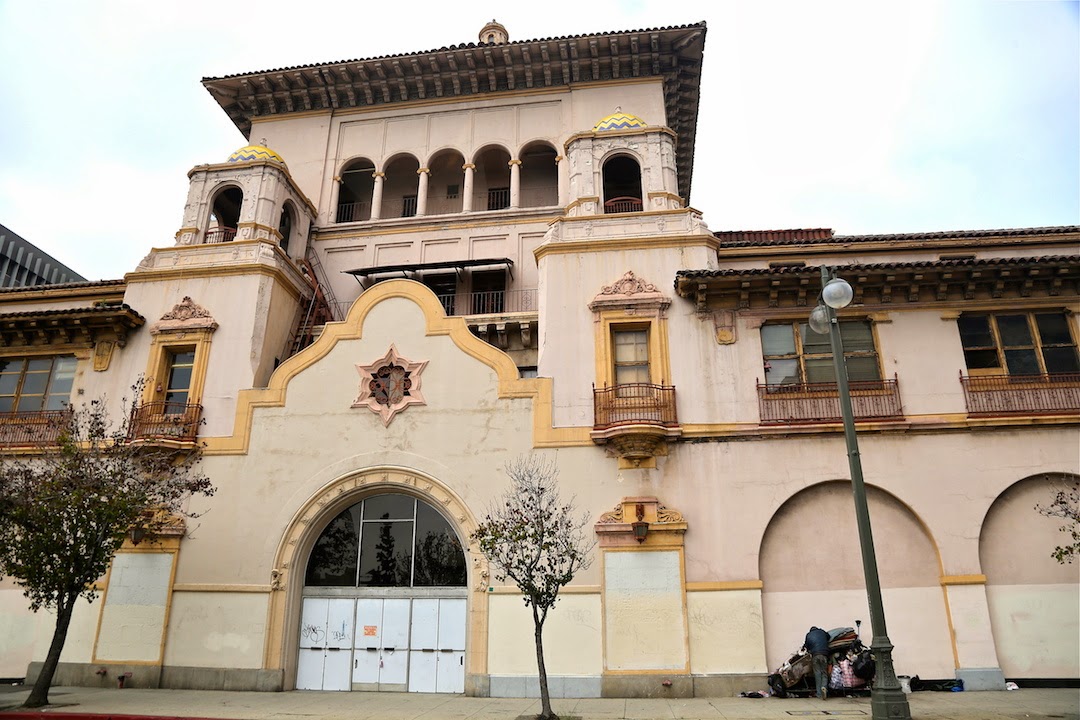 Another interesting detail in the clipping (which, unfortunately, does not include the full text) is that the cameraman who took the photos of the escape that day from the 3rd floor of the Los Angeles Railway Building across the street, dropped his camera to the street and almost fell himself. The camera was destroyed, but the pictures of Houdini mysteriously survived. Is that a ghost story? Maybe.

From the Examiner Building we proceeded down Broadway and turned up Hill. Here Richard pointed out the location of the long-gone Hillstreet Theater. This is where Houdini gave his first ever lecture on Spiritualism. This was a point of pride for me as this is not something covered in most books, and I suspect Richard learned about this from WILD ABOUT HARRY.

We then jumped on the freeway and headed back into Hollywood -- completing a nice circular route -- and drove past the Knickerbocker Hotel. It was here on the rooftop that Bess and Edward Saint held the Final Houdini Seance in 1936. This is probably one of then most famous Houdini Hollywood locations and, as with these other sites, is still largely unchanged (although it's now private senior housing). 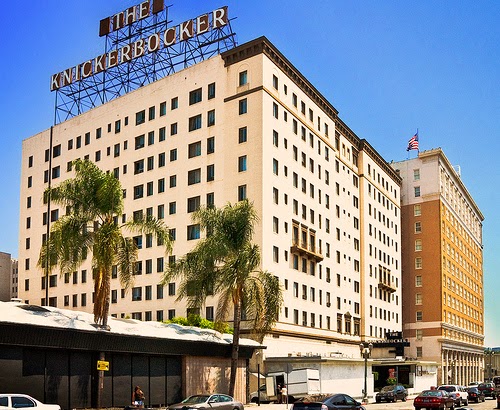 We continued down Hollywood Blvd. and made a right turn at Houdini's star on the Walk of Fame. The final location Richard pointed out was, appropriately enough, The Magic Castle.

Arriving back at Hollywood Heritage, we were able to buy copies of "The Haunted Houdini Tour" poster signed by artist Jose Cabrera. Our ticket also gave us admission to the museum, which contains the original office of Cecil B. DeMille and some wonderful silent movie memorabilia and equipment. It was a little late to catch the last brunch seating at the Magic Castle, so we instead headed to Du-par's in Studio City where my father treated us all to a lunch that included even more Houdini talk. Thanks again, dad!

At the start of the tour, Richard said he and the organizers worried whether anyone would be interested in a Houdini-themed tour. Well, the three sold out tours that day certainly put that fear to rest. Here's hoping GOULA, LA Hauntings, and Richard Carradine might treat us to another ghostly Houdini event in the future. 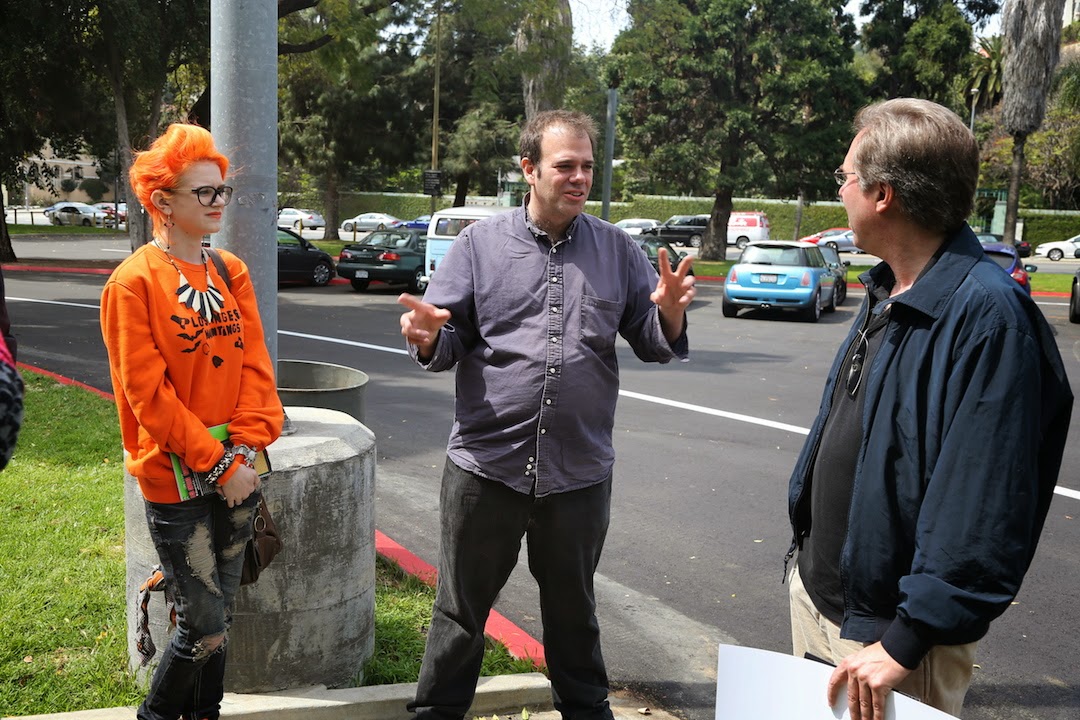 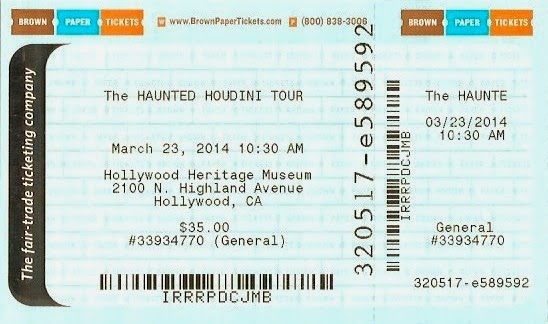