Here's a great way to end the week. This is never-before-shown film footage of Houdini doing a suspended straitjacket escape, courtesy of our good friend Jon Oliver. I don't recall having ever seen even a small fragment of this in any documentary, etc. Best of all, it is almost completely unedited, showing the escape start to finish. So get clicking and get an eyeful of Houdini that you've never seen before.


Unfortunately, I don't know the date nor location of this particular escape. [See update.] It's also unconventional in that Houdini isn't being suspended from a building on a city street. It looks like this is taking place at a fairground or some kind of open arena like a racetrack or airfield. And are those police officers or soldiers putting Houdini into the jacket? Also interesting is the fact that, having seen dozens of different suspended jackets escapes, the jacket here slips off somewhat prematurely.

The photo below, which comes from a 20th Century Fox press-kit for The Truth About Houdini documentary, appears to be from this same escape. This is the only image I'd seen of this stunt before seeing this rare film footage. 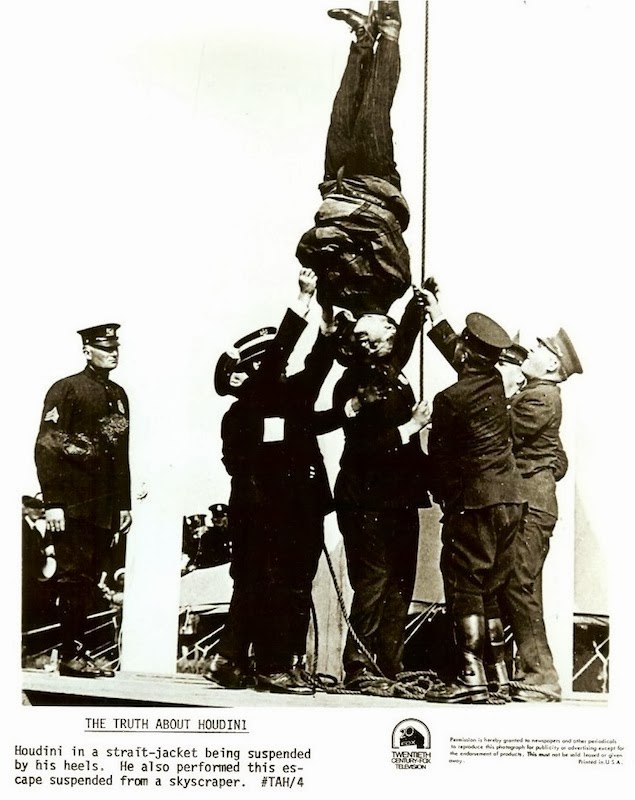 A monumental thanks to Jon Oliver for this one.

UPDATE: This appears to be the New York Police Department's "Field Days" relief fund event at Gravesend Race Track in Brooklyn on either August 21, 1920 or September 10, 1921 (Houdini did the escape on both dates). Below is an account of the 1920 escape from The Brooklyn Daily Eagle.