Trapped under the ice with Houdini 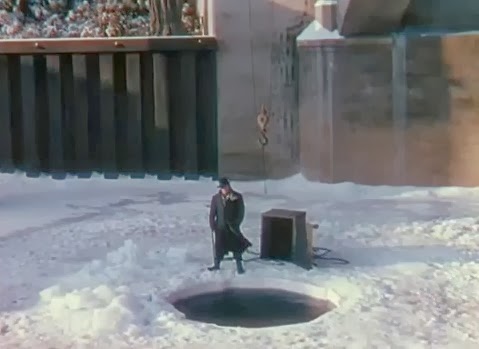 The story of Houdini trapped under the ice of a frozen river is a powerful part of Houdini lore. It was memorably dramatized in the 1953 film Houdini, and there is evidence that this year's Houdini miniseries with Adrien Brody will also feature the famous incident.

Even though Houdini himself told this story, it's now considered to be a fiction. There is no supporting evidence for it ever having happened, such as a newspaper account, and Houdini tended to change the location and details, as if to misdirect. The location most often cited is the Belle Isle Bridge in Detroit on November 27, 1906. But newspaper accounts of Houdini's bridge jump that day makes no mention of a frozen river (although it was cold enough for snow flurries). Furthermore, Houdini wore a 113 ft. safety line for that particular escape.

Recently I discovered a telling of this story in Houdini's own words in a biographical article he wrote for Hearst's in 1919 called "Nearly Dying for a Living." Here the location is Pittsburgh and, interestingly, it's not a handcuffed bridge jump, but an overboard box escape, just like in the Tony Curtis movie. It's fascinating to hear the version as told by Houdini himself:

My Battery predicament, however, wasn't quite as terrifying as a situation in which I found myself in Pittsburgh several years ago. During and engagement there it had been advertised that on a certain day I should be handcuffed and chained and placed in a box and dropped into the river from a bridge.

Nature was unkind, however, and when the day came the river had been frozen over to a depth of seven inches, which, as a matter of fact, wasn't surprising, as it was midwinter. But ice-water never has had any terrors for me, and a hole was cut in the ice just below the bridge and everybody, including a crowd of several thousand of persons, arrived on time.

With the handcuffs and chains in place, I was put into the trunk, with in turn was bound with ropes and chains. Then the trunk was dropped into the river through the hole in the ice. The handcuffs and chains about my arms and legs and the bound trunk offered no more than the usual difficulties, but when I found myself free of them all I discovered that I had drifted with the current and when I attempted to rise my head bumped against the seven inches of ice. Fully conscious of the seriousness of the situation I looked about in the hope that a greater light might come through where the hole was and give me my directions. But there was no guiding light.

Then I knew that I must breathe. I was under the water longer than the allotted time. And breathing meant that I should drown and go on drifting for weeks and months. But as I had never before given up, I didn't give up then. Instead, I found and "air pocket," a space in which the ice seemed to curve upward, leaving and inch or more of room between the surface of the water and the ice above. I lay flat on my back, tight up against the ice, and breathed. Then I found that the water came in little intermittent waves and that by keeping my face close against the ice I could move about and get and occasional breath. I still held in my hands the handcuffs that I had removed from my wrists, and with these pressed against the ice I began a circular movement. And suddenly I bobbed up through the hole, and the men reached down and lifted me out onto the ice, wrapped me up and hurried me to my hotel.

The crowd that had come to see me and my assistants believed that I had been drowned and, although I didn't hear it, they say that a mighty cheer went up when I appeared.


One point of interest is that Houdini says he couldn't hear the cheers of the crowd when he surfaced. This strikes me as a very believable detail that you wouldn't find in purely fictionalized account. No, I'm not about to argue that this really happened; but wouldn't it be nice to discover that there is some measure of truth to this story someday?

But the most revealing difference between the Houdini and Hollywood versions is how the harrowing predicament resolves. In the Curtis movie and, possibly, the Brody film, Houdini is saved from his ice-bound grave by the spirit of his dead mother. In the Curtis film her voice calls out to him and leads him to the hole. Behind the scenes photos from the Brody film show actress Eszter Ónodi suspended under the ice in her nightgown -- a ghostly vision of Mama? The movies turn this event into an affirmation of the world beyond. Divine intervention saves Houdini -- a power greater than himself.

But Houdini's version has none of this. In fact, I find it interesting that he goes out of his way to say that he searched and found no "greater" or "guiding light" to rescue him. A very deliberate choice of wording there. Because, if you think about it, a version of this story that affirms the existence of the supernatural would be an anathema to Houdini. In his version of the "true" events, Houdini saves himself. 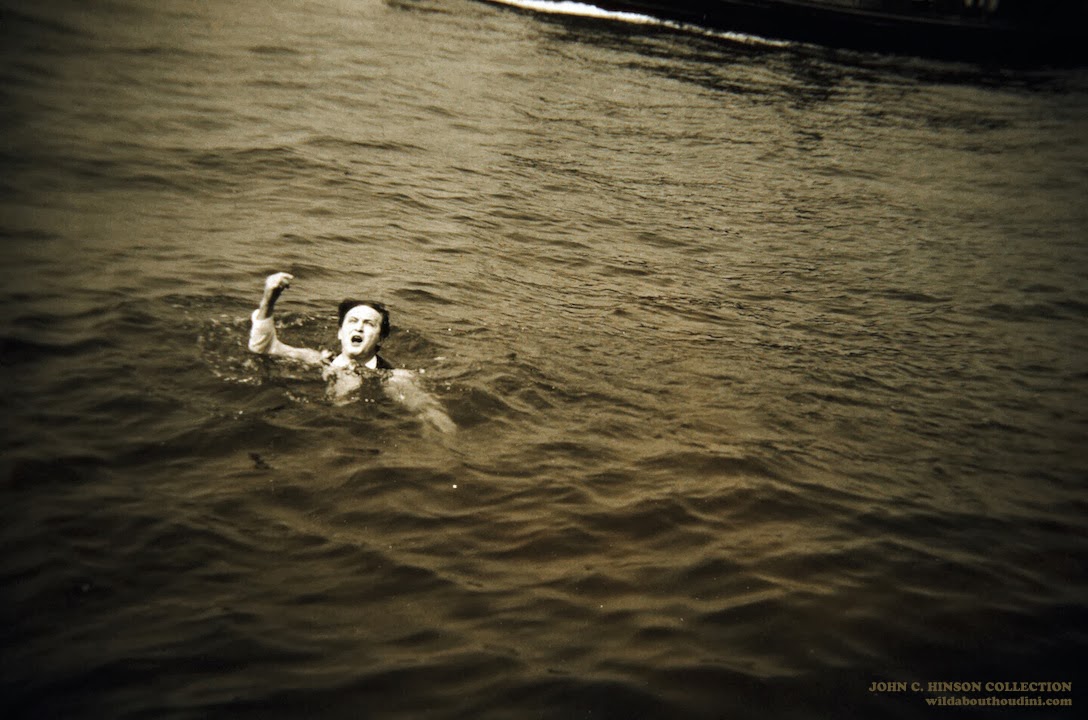 UPDATE: I recently found what might be the genesis of this myth in a 1912 interview with Houdini. Check out: Houdini freezes the Detroit river.
Related posts: