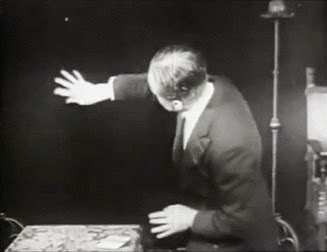 We are all familiar with the famous film footage of Houdini doing card manipulations late in his career. Little is known about this footage, except that it was made by Pathe in 1926. But while doing some unrelated research, I stumbled on two newspaper advertisements that appear to show exactly when and where this short film played and, most excitingly, the title: "Velvet Fingers."

These ads appeared in The Hutchinson News on April 1st and 2nd, 1926, and advertised the line-up of movies at the Royal Theater in Kansas City. The main feature was the Ralph Lewis newspaper drama, The Last Edition. But look below and you'll see among the short subjects on the bill is HOUDINI in "VELVET FINGERS." The second ad has the more descriptive "HOUDINI in an array of tricks." It seems almost certain that "Velvet Fingers" and the famous Houdini card flourishes footage are one in the same.

Unfortunately, I can't find any other record of a short called "Velvet Fingers" (there was a serial with this title in 1920). Might the theater have invented the title? Hard to know. But the Our Gang short that is billed above the Houdini movie was indeed called "Better Movies."


It's intriguing to wonder just how many tricks in the "array of tricks" existed in the full short. In the surviving film, we see Houdini demonstrate a 32 card forward and back palm, an armspread turnover, a waterfall, and an amazing armspread toss and catch. Houdini was featuring these flourishes in his 3 Shows In 1 at this time, so this is really the only footage that exists of Houdini doing his stage act. Pretty cool.

As far as I know, this short no longer survives complete. Some footage appeared in 1950 feature documentary, The Golden Twenties. The most complete selection of footage can be found on the 3-DVD set "Vintage Magic Films" produced by The Miracle Factory. I once had the fantasy that this could have been a sound short, but certainly that would have been advertised, so I have to put that wish to bed.

And now here's a short clip from "Velvet Fingers."

UPDATE: Readers Bill Mullins and Joe Notaro have uncovered some clippings that confirm the title and give us even more details about the full footage:

Motion Picture News, March 20, 1926:
Pathe Review No. 12 brings Houdini to the screen as a master manipulator of playing cards in a novelty called "Velvet Fingers."

Greensboro NC Record, March 21 1926:
HOUDINI'S VELVET FINGERS
Houdini, master magician, brings to the screen his grace and form in handling playing cards in a current issue of the Pathe Review. He also presents an expose of some of the card tricks by means of which card sharps have mulcted the public of millions of dollars. Slow motion analyses "the gambler's cut," in which the middle and bottom of the deck are transposed, leaving the top as it was; the "forearm rifle" in which Houdini makes a whole deck of cards obey his orders and the "forearm toss," in which every card stays in its place as if under hypnotic control, and other stunts that make the cards almost sit up and talk. [typos as in original]


UPDATE 2: Was this footage originally part of a 1925 short produced by Red Seal Pictures? Click to read: The Houdini card manipulation movie mystery deepens.
Written by John Cox at 1:08 PM