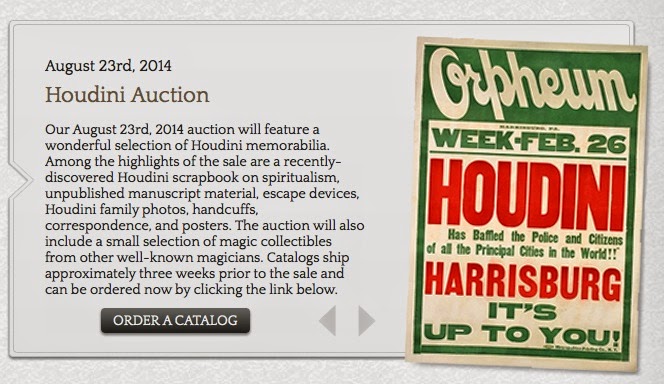 Potter & Potter have announced August 23, 2014 as the date of their special Houdini Auction in Chicago. Here are some details from the auction house website:

Our summer auction will feature choice memorabilia related to the most famous magician and escape artist the world has ever known: Harry Houdini. Among the featured items are:

-Lithographs, Broadsides and Challenges, featuring the iconic "King of Cards" poster used in Houdini’s earliest days as a circus performer.

-Photographs and Ephemera, among them Houdini family pictures, postcards, manuscripts, autographs and correspondence, including unpublished images and documents.

-A Recently-Discovered Houdini Scrapbook, as well as a Houdini family scrapbook, and other personal artifacts.

-Associated Memorabilia, chief among them documents related to Hardeen, as well as others magicians and celebrities who crossed Houdini’s path; and additional rare magicana.

The auction takes place at 10:00 am on Saturday, August 23rd in our Chicago Gallery. Catalog ship approximately three weeks prior to the sale. Previews take place in the gallery in the days preceding the auction, from 10am - 5pm, CST.


It looks like that "recently discovered Houdini scrapbook" is the lost spiritualism scrapbook that WAH played a role in revealing last year. This will certainly be a highlight of the auction, which sounds like it's going to include a truly remarkable selection of Houdini rarities.

For more details and to order the Houdini Auction catalog, visit the Potter & Potter website.