Magician Adam Steinfeld of Adam Steinfeld Magic Live has discovered this poster for HISTORY's upcoming Houdini miniseries starring Adrien Brody. Notice it says "Spring 2014." The miniseries was originally announced for broadcast in May, so maybe this is an earlier concept? 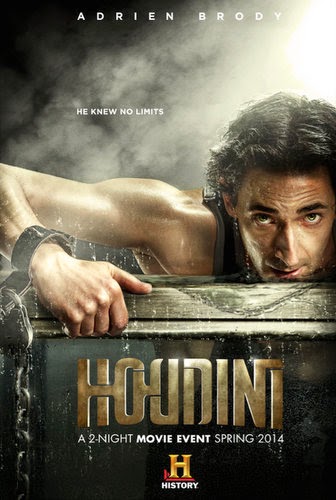 Houdini co-stars Kristen Connolly as Bess, Evan Jones as Jim Collins, Eszter Ónodi as Cecilia Weiss, and Tom Benedict Knight as Theo Hardeen. The 4-hour miniseries is directed by Uli Edel from a script by Nicholas Meyer. It will air over the course of two nights on HISTORY starting September 1, 2014.