Houdini and the diving suit challenge

In the 1971 BBC documentary The Truth About Houdini, there is a quick shot of Houdini in handcuffs and leg-irons wearing a deep-sea diving suit. It's driven me crazy that I've never seen this photo elsewhere and complete. 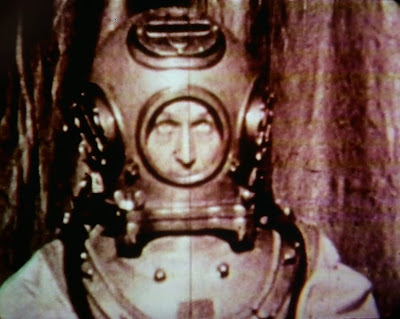 But now the great Kevin Connolly has uncovered the full photo in a clipping detailing this challenge escape. So click on over to Houdini Himself and learn the story of Houdini's daring dive (on land)!

UPDATE: Kevin's site is now offline, but he has graciously allowed me to share his clipping here. This is the only account of this challenge that I know of. Enjoy.

It's worth noting that Houdini patented a deep-sea diving suit with an emergency quick release mechanism. No escape from the bends, however.

UPDATE 2: I can now identify this as being the week of March 4-10, 1912, while Houdini was at the Colonial Theater in Norfolk, VA. However, the exact day of the challenge currently eludes me.
UPDATE 3: The date eludes me no longer! This happened on Friday, March 8, 1912. Newspapers reported that Houdini was "nearly exhausted and his shirt was splotched with blood in several places."
Written by John Cox at 7:56 PM