Was Houdini killed by Chop Suey?

Anyone who has spent any time reading this blog knows the topic of Houdini's death is a lightening rod for controversy. For some, appendicitis isn't enough. There are theories that he was murdered by Margery, punched with a Ninja death blow, poisoned by his own doctors and, yes, even done in by Bess (I'm looking at you, Brad Meltzer). There was even a dubious plan a few years back to exhume his body to test for poisoning.

But this shouldn't come as a surprise. We've all seen how when a celebrity dies unexpectedly, a wave of tabloid gossip and conspiracy theories follow. This was certainly the case with Houdini, and it seemed to start even before the pumpkins burned out on Halloween. Below is a cable sent to Grace Hospital just two days after Houdini's death in which "more that one million readers" demanded to know what the magician was fed during his final days.


Of course, we now know what Houdini was fed during his fatal illness -- at least we know what might have been his last meal. In his final days, Houdini told one of his attending physicians, Dr. Daniel Cohen, "I have a yen for Farmer's Chop Suey," a dish reported to have been popular with Jewish immigrants from Eastern Europe. In a effort to make Houdini as conformable as possible, Dr. Cohen went to a nearby delicatessen and bought two helpings which he shared bedside with the magician.

The blog Live To Write Another Day offered up this thought on why Houdini might have requested this dish in his final days:

"This craving was no doubt one of nostalgia rather than hunger, as Houdini was gravely ill with peritonitis and virtually unable to eat. It may also have been a response to his very high fever, as the chilled, creamy salad was traditionally eaten on hot summer days."


Is it just a coincidence that Houdini died a short time later!!!??? 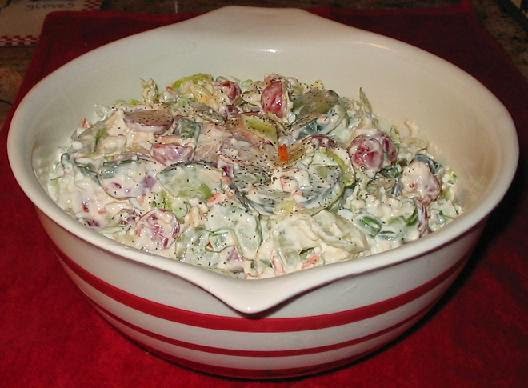 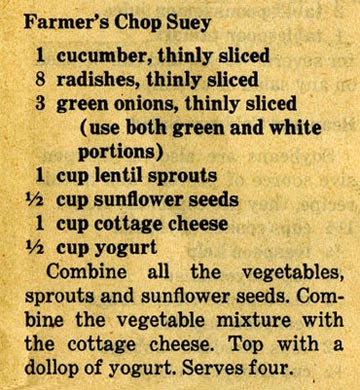 Thanks to John C. Hinson for the clipping, "Kat's Mom" at Food.com for the yummy picture, and Antique Recipes for the classic ingredients. Read more about Houdini's Last Meal at Live To Write Another Day and Mae's Food Blog.