REPORT: Inside the L.A. Conference on Magic History 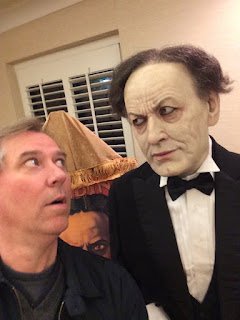 Last week I had the great pleasure of attending the 14th Los Angeles Conference on Magic History (my first). So much went on during the 3-day conference that I'll leave it to traditional magic journals such as Genii to properly detail all that hosts Jim Steinmeyer, Mike Caveney and John Gaughan brought attendees this year. Instead, I'll focus on the Houdini highlights.

The conference had two major Houdini events this year. The first came on Thursday when Houdini himself made an appearance in the form of Casey Wong's amazingly life-like Houdini figure (which you might remember from this post).

Casey gave a talk Thursday afternoon and spoke at length about the creation of his Houdini figure. It was a excellent lecture with photos of every step in the process. The time and effort that went into creating Harry was tremendous -- every hair on his head was individually inserted, for example. Casey explained that he made his Houdini taller than life-size (he's 6-foot) because he wanted to depict Houdini "as he saw himself." Much has been made of Houdini's pale appearance. Casey explained that the idea here was to depict Houdini onstage, so his pale visage is pancake stage makeup.

The Houdini figure was set up in the conference museum. It was certainly a popular display, with attendees taking photos and selfies with the Master Mystifier all weekend. 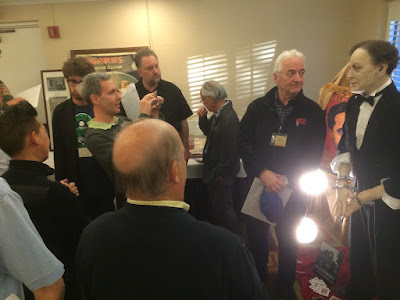 Other Thursday lectures included Bill Becker on spirit photography; Trevor Dawson on Signor Arvi; Richard Hatch on Dr. Kurt Volkmann; and a thought-provoking talk by Peter Lamont on the history of magic and witchcraft, and why we may have been getting that history all wrong.

I should say that nearly every talk throughout the conference had a reference to Houdini. One of my favorites came during the Thursday lecture by Dean Arnold and Ken Trombly, who spoke about how they recently uncovered a large cache of Chung Ling Soo posters in England. Dean, a pilot, told an amusing story of how he inadvertently invaded an airport's airspace when he flew himself to the site of the find. When Ken asked if he had a photo of his plane, Dean brought up a photo of Houdini's Voisin.

Speaking of aviation, Joe Hanosek gave me a nice photo of Houdini flying his Voisin. It's not an original, but it's a nice clear shot of the plane in flight that I will use on future posts. Joe also gave me a copy of his new booklet, Houdini!!! in Columbus, Ohio. 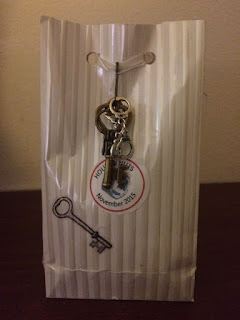 On Friday, before the afternoon lectures, a group of us snuck out to The Magic Castle for lunch in the Houdini Seance Room (of course!). This gathering of "Houdini Nuts" has become a tradition whenever the mighty Arthur Moses comes to town. It's also a tradition for Arthur to bring a creative gift for the Nuts. This time it was a bag of nuts! Another thrill was that the great Patrick Culliton joined us and held court as only "Houdini's Ghost" can do.

One of the perks of being invited to the L.A. History Conference is having access to the dealers' room. These are magic's top sellers, and the room is a museum in itself. But it's also where one can buy some rare pieces typically only encountered at auction. I hadn't planned on buying anything, but then I remembered my "Moses Buy" philosophy... Buy one quality Houdini item a year.

I found that item at the table of a legend himself, Ken Trombly, collector and proprietor of MagicPosters.com (flip through the Kalush book, and if there's a photo of Houdini you've never seen, chances are it came from Ken's collection). Ken shared with me a binder filled with original Houdini challenges. I could not resist what I considered the best in the book. You can see my new treasure below. 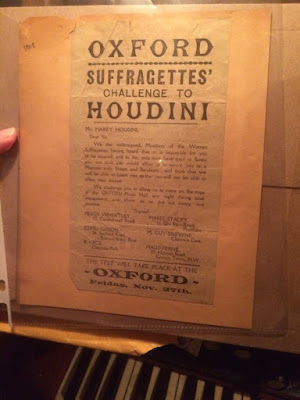 The Friday lectures were largely Houdini-free, but still fascinating. One of the reasons I go to magic conventions is to learn about other magicians. Bill Spooner discussed the long career of African-American magician Eugene Hellman. Dale Lorzo covered Edwin H. Brush. Bill Liles spoke on Raymond Phillips, Magician of the Radio Waves. Steve Valentine discussed the Cards to Pocket routine (he's wild about C2P!). Bill Becker talked Matthew Brady & Herrmann (more on this below), and our friend Bill Mullins gave a great lecture on gambler Kid Canfield.

The grand finale was Jim Steinmeyer's recreation of Kellar's Blue Room and Self-Decapitation Illusion, with Nicholas Night playing the part of Harry Kellar. Getting the opportunity to see lost illusions from the golden and pre-golden age of magic, recreated for one night only, is what the L.A. Magic History Conference is all about. Unforgettable.

Another highlight on Friday was the announcement of an amazing new find, and even though this isn't Houdini-related, it's too incredible not to detail. Speaker Bill Becker revealed he had discovered in a private collection the negative of a never-before-seen portrait of Alexander Herrmann, taken by the famous Civil War photographer Matthew Brady. What's even more incredible is that the photo is of such high resolution that one can make out Brady and his studio in the reflection of Herrmann's eye.

A large print was made for the conference and displayed in the museum after the Friday night talks. I don't know what the future holds for this image, but it was a beautiful thing to see. Even Herrmann expert James Hamilton said it was the best portrait of Alexander he had ever seen. 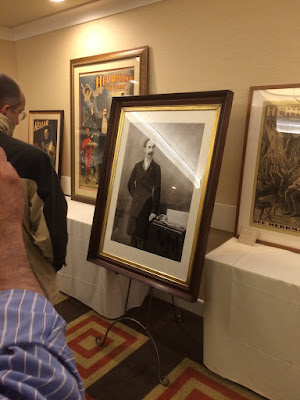 On Saturday we took a field trip to Spectral Motion in Burbank, owned and operated by Mike Elizalde. Spectral Motion is a practical special effects house that creates real movie magic, especially creature costumes and animatronics, for major films such as Hellboy and Hansel and Gretel. But magic fans might recognize Spectral Motion as the makers of a series of beautiful bronze busts of master magicians. During the tour of the workshop, I spied a familiar face looking down from a shelf of original clay molds. 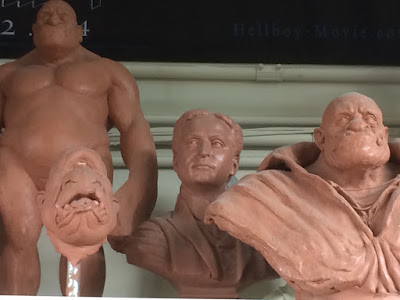 The big Saturday night show saw lectures and performances by John Gaughan (Automata in the Movies), Gene Anderson and Jack Goldfinger (The Torn and Restored Newspaper), John Carney (as L'Homme Masqué), and Mike Caveney who performed John Daniel's "Sawing A Lady in Half" and Maurice Rooklyn's "Birth of a Pearl" using the original apparatus. Saturday also saw the second big Houdini feature of the conference. This was the surprise appearance of Q the Automaton from The Master Mystery.

I've already shared details and a film clip of Q's invasion HERE. Below is one more photo of the Automaton mingling in the courtyard of the Garland hotel after Friday's lectures. Q was played by Jeff Chang whose eyes you can see through the mouth. During his talk, John Gaughan showed how you could see this in the original film. I never realized that the actor was looking through the mouth, but this was a clever way to add a foot or more of height to the robot. Needless to say, the Automaton was a monster hit! 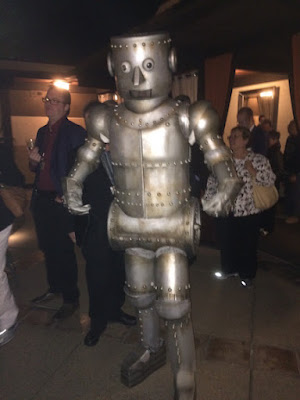 The conference itself was filled with magic luminaries. I was thrilled to meet Lance Burton, and I almost fell over when he said knew my blog and even specifically recalled my post on the Buried Alive. Other recognizable faces were: Ricky Jay, Mac King, Max Maven (who gave me a rivet that popped off the Automaton), Bill Kalush, David Ben, Julie Eng, Adele Friel Rhindress, Rob Zabrecky, Jonathan Pendragon, Erika Larsen, Lisa Cousins, Joe Fox, and many more names and faces familiar and famous. What a magical weekend it was. 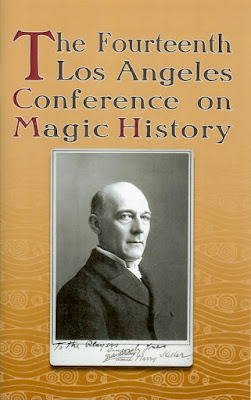