The Amazing Harry Houdini, the first book in a new collection of pulp adventures featuring the great escape artist, is released today by Ron Fortier's Airship 27 Productions. Here is the full press release: 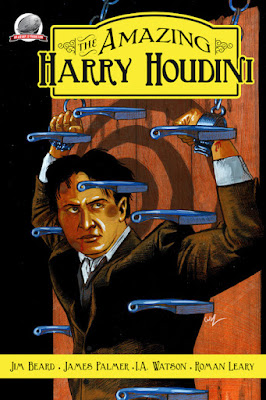 Airship 27 Productions is thrilled to announce the released of its newest pulp anthology starring one of the most famous figures in American theatrical history; magician – escape artist supreme, the one and only Harry Houdini!

Houdini began his stage career as a card manipulator. As his popularity grew, he quickly became known as one of the most colorful stage magicians and escape artists of all time. Then the movies came knocking and the man people had only read about in the newspapers was suddenly starring on the silver screen captivating audiences with his daring serial exploits. Harry Houdini was no longer just a magician, he was a bonafide celebrity known around the world.

“I’ve been fascinated with this character since I first heard of him as a child,” says Airship 27 Productions Managing Editor Ron Fortier. “The more I learned it became clear that Houdini, during his own lifetime, evolved into one of the first true international superstars. Once he became a hero of the cinema, his fame and legend were permanently cemented in the hearts of his admirers everywhere. Wherever he appeared the states, he would attract crowds numbering in the thousands.”

In 1904 Houdini and his manager, Martin Beck, began a world tour starting in London and the adventures grew even more fantastic. “Although our stories are fictional,” continues Fortier, “we saw his globe-trotting escapes as the perfect backdrop for our writers to whip up fantastic, action packed tales.” From encounters with Bram Stoker and Arthur Conan Doyle, Houdini then battles an evil cult in the catacombs of Paris before heading to Berlin on the famous Nord Express where murder reared its ugly. These amazing tales are chronicled here by Jim Beard, James Palmer, Ian Watson and Roman Leary.

The cover is by Carl Yonder with gorgeous black and white illustrations by Pedro Cruz and all put together by our award winning Art Director, Rob Davis. And so Airship 27 Productions is truly excited to present our readers with a brand new look at a truly extraordinary man who was indeed larger life, he was Harry Houdini, Pulp Hero!


Purchase The Amazing Harry Houdini, Volume 1 at Amazon.com (U.S.) and Amazon.co.uk (UK).
Written by John Cox at 8:35 AM