John Bengtson, "the great detective of silent film locations," has a must-read post on his blog today about the shooting locations used in The Grim Game. Bengtson specializes in Buster Keaton and he's matched many of the locations from Keaton's films to the Houdini movie. This is a treasure trove of information! 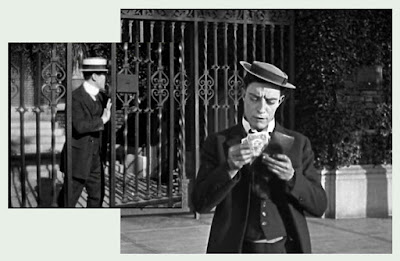 Houdini and Keaton at the Bergstrom estate at 590 N. Vermont (SE corner of Vermont and Clinton).

The locations featured here are primarily Hollywood-based. Bengtson is going to follow-up with another post featuring the downtown locations, including the site of Houdini's rooftop straitjacket escape (the former Harbour Apartments).

I'm a big fan of John Bengtson. I have a signed copy of his book, Silent Echoes, and I've heard him speak. Having John tackle a Houdini movie is a dream come true. When I get the chance, I will snap and share pics of these locations as they appear today.

Thanks to Rick Schmidlin for the tip.