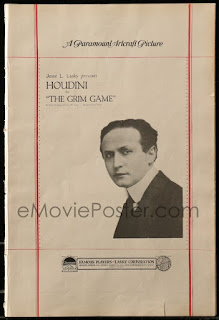 An original pressbook for Houdini's The Grim Game sold for $526 in an eMoviePosters auction last week. I've never seen a Grim Game pressbook come up for auction, so I feel like this might have been a steal at this price. But it also might have been because the pressbook was missing four pages and the condition was described as only "Fair."

This came from a bound volume of 21 Paramount pressbooks, all from 1919. The auction site unbound them and auctioned each individually. The Grim Game was the highest seller by far. In second place was Lon Chaney's Miracle Man at $98.