How Houdini planned to (not) go over Niagara Falls 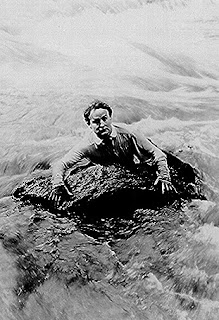 For some reason, many people think Houdini went over Niagara Falls in a barrel. I continually see people landing on my blog via a Google search looking for info on this. Of course, this was one daredevil stunt that Houdini did not perform. The closet he came was swimming the rapids of the Niagara River for the climax of his film The Man From Beyond [read: Houdini's rough ride at Niagara Falls].

But this doesn't mean he didn't consider the idea. In the book Houdini's Escapes, Walter B. Gibson reveals that Houdini made notes on a "Niagara Falls Escape" that would see him going over the falls in a packaging box. Gibson says Houdini's notes were "merely suggestions that had not reached the point of practical solution" and that it would have been a "trick test."

Here are the notes as Houdini recorded them:

The idea is to be nailed in a packing case, thrown over Niagara Falls, and eventually make an escape!

So that the crowd can see that I am being nailed into the packing case, the nailing is done on a platform, into which I can slide after the box is nailed up.

The best way would be to have the platform on a large wagon, which is drawn down to the landing place, where I get into the water according to opportunity.

Or else get back into the box when placed on wagon, and be found there, having failed to escape (being "knocked out" coming over the falls).

This can be worked into an extra good idea and needs doing some time.


It's not surprising that Houdini would not plan to actually go over the Falls. That would be suicide. But it is a little surprising that he would entertain the idea of an outdoor stunt that would be a fake -- more magic trick than escape. It's also interesting to see that he that considered a "failure" would be just as effective an outcome. No doubt he saw the enormous publicly value of such an exploit.

But it's possible the reason he never brought the idea to fruition is that a "trick test" just didn't seem like a very Houdini thing to do. 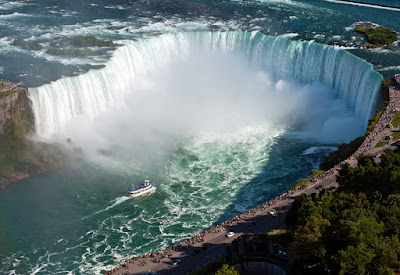 Despite never doing his stunt, Houdini's connection to Niagara Falls remains strong. Not only did he shoot The Man From Beyond on the rapids, but for years Clifton Hill on the Canadian side was home to the Houdini Magical Hall of Fame. Ironically, the museum housed Houdini's overboard packing box, which may have been the very box Houdini would have used for his Niagara Falls Escape.