Hardeen among the celluloid spirits

This photo from the private collection of Tom Ewing has me doing cartwheels for a few reasons. First, this is the only image I've ever seen of Hardeen doing any sort of spiritualist debunking. While we know Hardeen carried on his brother's escapes and magic, what's less known is that he also carried on Houdini's spirit exposures, or at least he claimed he did (watch for a post on this soon). 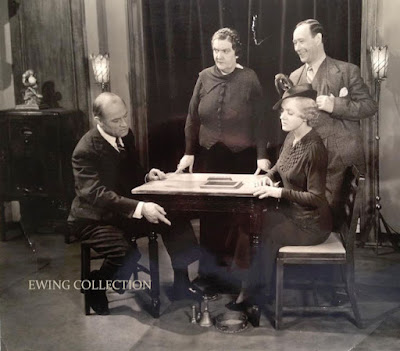 But there's another reason I'm flipping out over this image. This, to my knowledge, is the only known photo from Hardeen's 1937 film, Medium Well Done. The photo shows Hardeen with co-stars Gertrude Mudge, Margaret Breen and Paul E. Burns.

Medium Well Done was a one-reel Vitaphone short (Prod. #1958) directed by Lloyd French. It was shot at the Flatbush Vitaphone Studios in January of 1936 and released on March 6, 1937. In it, Hardeen played a "hardboiled detective" on the case of a bogus medium. A story synopsis from a Vitaphone catalogue reads:


Medium Well Done is considered a lost film. But it's possible that's just because no one has made a good search for it. Many of the early Vitaphone shorts survive, and there is an ongoing effort by The Vitaphone Project to find and restore the films. Several DVD completions of early Vitaphone shorts are now available via the Warner Archives.

Here's hoping one day someone might uncover this important piece of magic and movie history.

A big thanks to Tom Ewing for letting me share this treasure here. Also thanks to Kevin Connolly and his terrific Facebook group, CONJURING HISTORY - BUY, SELL AND TALK.

UPDATE: According to Ron Hutchinson at The Vitaphone Project Facebook group, Medium Well Done is NOT lost. He says it "exists in 35mm at Library of Congress." This gives me hope we might one day see it released via the Warner Archive Collection.