Piper Houdini is back

Glenn Herdling's second Piper Houdini adventure, Piper Houdini: Nightmare on Esopus Island, is out now as an eBook. A print edition will be available later this year. Here's the cover and plot summery: 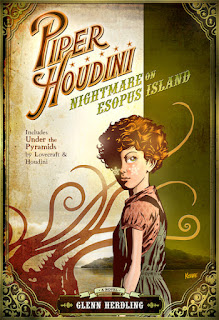 After running away from Houdini and Bess, saving wild animals from a raging inferno, and a breathtaking showdown with a vampire named Flapper, Piper settles in with the performers of the Coney Island freak show only to discover that she may be the greatest freak of all. As the summer of 1926 heats up, Piper continues the quest for her dark legacy. Along the way, she will encounter a variety of real-life luminaries from the 1920s, including the erudite author H.P. Lovecraft and a Rudolph Valentino zombie! Piper will need to use all the valuable skills she learns from her new friends to confront the malicious individual who has been murdering sideshow performers.

In this pulse-pounding conclusion to the tale begun in Piper Houdini: Apprentice of Coney Island, author Glenn Herdling takes readers from the rousing backdrop of the legendary Brooklyn amusement pier to a mysterious island up the Hudson River where a sinister rite takes place that could enslave the human race—unless Piper and her unusual friends can stop it.

PLUS: Piper Houdini: Nightmare on Esopus Island includes an adaptation of "Under the Pyramids," a short story by Houdini and Lovecraft that contains valuable clues to Piper's origin!


You can purchase Piper Houdini: Nightmare on Esopus Island for Kindle on Amazon.