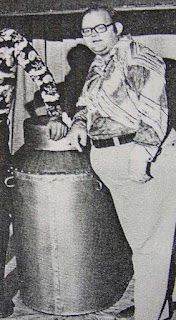 The S.A.M. reports that comedic magician, producer, and "force of nature," Abb Dickson, has passed away after a long illness.

Among his many contributions to the magic world, Abb will be familiar to Houdini buffs as the man who provided magic props, including the Milk Can and Water Torture Cell, to the 1976 TV biopic The Great Houdinis starring Paul Michael Glaser. In recent years we've had some adventures tracking down those original props, which have become iconic in their own right.

Abb was elected president of the I.B.M. in 1997. He was also close friends with Orson Welles and appeared in several of Welles' films.

You can read Abb Dickson's full obituary at The Magic Compass. A crowdfunding effort has been launched HERE to cover his funeral expenses.