Ron Fortier's Airship 27, who last year published a collection of pulp stories called The Amazing Harry Houdini, are offering a limited collector's edition of their new book, Holmes and Houdini, during this weekend's Pulp Fest 2016 in Columbus, Ohio. The following is from the Airship 27 website: 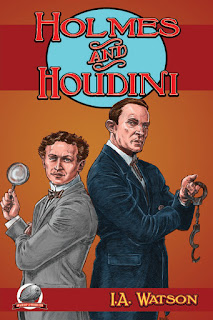 Greetings Loyal Airmen, as you are reading these words, the Air Chief and Art Director Rob Davis are in Columbus, Ohio about to kick off this year’s wonderful Pulp Fest convention. We’ve been coming to this show ever since it started and always have a great time there. This is year is going to be special as we are going to have 15 copies of our limited collector’s edition of our new novel, “Holmes & Houdini” as written by I.A. Watson. The original plan for this book, back when it first went into operation was to have DC graphic artist Chad Hardin do the cover for us, with Rob doing the interior illustration. Well circumstances beyond our control made it impossible for Chad to get his cover done in time for the con and so Rob hit upon the idea of doing a special cover (that he would do) and printing up a limited number of copies to specifically have for Pulp Fest.

And here is that Rob Davis cover. We had 15 copies printed up. Once we’ve sold these, we will not be printed any others. So those people fortunate enough to snag one of these at the show will have a true collector’s item as promised. Rob will personally sign and number each (ala #1 of 15 etc.etc.). Later down the road, when Chad does turn in his official cover, we will release the book. If you’d like to actually hear the story behind this special event, take a listen to our recent Episode # 17 of our Airship 27 Podcast found here on You Tube.


I really like this cover. It's a good Houdini likeness, and Holmes appears to be based on my favorite Sherlock, Jeremy Brett. I also like that it exploits the difference in their height.

Thanks to Tim King @Burbankspeaking.